Fire in the Hole (novella)

Edit
watch 01:54
Obi-Wan Finale - The Loop
Do you like this video?
Play Sound 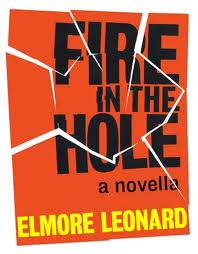 Fire in the Hole is a 60 page novel written by Elmore Leonard.

U.S. Marshal Raylan Givens journeys back to his roots in an Eastern Kentucky coal-mining town to pursue Boyd Crowder, a white supremacist income tax evader who plans to blow up a Cincinnati IRS building. Crowder likes to shout "fire in the hole," a coal mining phrase used before exploding a charge, whenever he blows up something.

In true Leonard fashion, Givens and Crowder have a begrudging respect for each other, a holdover from their coal mining days together. Crowder's sister-in-law, Ava, carrier of a long-burning torch for Givens and a long-barreled rifle, confuses the mix. Throw in several rednecks, more shotguns and a rocket launcher, and the stage is set for a wild ride through Leonardland, where the talk is tough, honor is everything and a promise is a promise. This adrenaline-charged novella is full of sharply honed characters, plot twists and dialogue that only Leonard could have written, demonstrating that he has as much command of this new medium as he does the printed page.

Givens, previously seen in Pronto and Riding the Rap, is the marshal you hope is assigned to protect you. With his creased Stetson and Old West lawman personality, he only draws his gun to shoot (and kill). He's people smart, but Crowder is too. His people shave their heads and wear swastika tattoos. They also have no love of the law or the government.

In signature Leonard style, the dialogue moves the action rather than the narrative along. And action -- delivered in bursts, like the blasts of a gun and with just as much force -- is the key to this novella. So strap yourself in, get comfortable and relinquish yourself to the world of Elmore Leonard, novelist, screenwriter and now e-novelist, as he returns to the genre of his roots, 21st century-style.

Click the link below to read Fire in the Hole courtesy of Harper Collins.