Edit
watch 01:36
We're Getting Mutants in the MCU - The Loop
Do you like this video?
Play Sound
Frank Browning 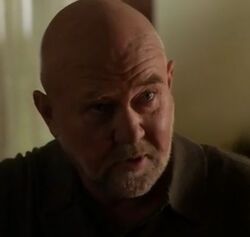 Frank Browning is a recurring character in the fourth season of the FX series Justified. Frank was the owner of Black Pike Mining, who was at the center of an assassination plot by the Clover Hillers. He is portrayed by guest star Rocky McMurray.

Not much is known about his background.

In "Outlaw", Boyd visits him and informs him that the Clover Hillers sent him there to kill Frank. Frank, being one step ahead of Boyd, has Deke come out with a shotgun and Frank orders him to leave. Later, the Tonin Hitman, impersonating a Harlan County Deputy visits, killing both Deke and Frank after Theo Tonin confirms the latter is not Drew Thompson.