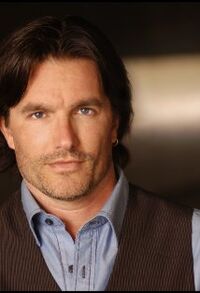 Frank John Hughes - born on November 11, 1967 (1967-11-11) (age 52) in The Bronx, New York, USA - is an American actor who guest stars as Terry Poe in the FX series Justified third season episode "Cut Ties". He starred in the series Cover Me, Band of Brothers, Players and LAX. He has also appeared in Boomtown, 24 and The Sopranos.

A native of the South Bronx, Hughes studied Jazz composition at the Berklee College of Music in Boston. At the age of nineteen he became one of the youngest members ever to be given lifetime membership in New York's prestigious school of method acting, The Actor's Studio. He also studied with acting teacher Sonia Moore. He appeared in numerous stage productions Off-Broadway before embarking on a screen acting career.

In 1996 he appeared in the films Layin' Low, The Funeral (opposite Benicio del Toro and Christopher Walken) and No Way Home. He also had roles in the series Swift Justice, Viper and New York Undercover. In 1997 he starred in the film Mr. Vincent in the title role of John Vincent. The part won him critical acclaim at the Sundance Film Festival. He also appeared in a second episode of Law & Order (playing a different character), an episode of Feds and began a starring role in new series Players as Charlie O'Bannon. The show was created by Dick Wolf and was cancelled after completing its first season in 1998. In 1999 he had roles in the films Angel's Dance and Blink of an Eye and the series Sliders and JAG. In 2000 he starred in Cover Me: Based on the True Life of an FBI Family as Agent Brooks and appeared in an episode of Martial Law along with the film Robbers.

In 2001 he starred in the HBO World War II mini-series Band of Brothers as paratrooper "Wild Bill" Guarnere. Justified show runner Graham Yost worked on the show as a writer and producer. The show was executive produced by Steven Spielberg and Tom Hanks. He also appeared in UC: Undercover and the film Anacardium. He won best actor at the New York Independent Film Festival for Anacardium. In 2002 he had roles in the television feature Big Shot: Confessions of a Campus Bookie, two episode of the series The Guardian and the Spielberg film Catch Me If You Can as Tom Fox. In 2003 he appeared in the series Monk and Without a Trace. He also guest starred in two episodes of Boomtown as Officer Vincent Manzani. Boomtown was created by Yost. In 2004 he guest starred in an episode of Curb Your Enthusiasm and starred in new series LAX as LAPD officer Henry Engels. LAX was cancelled before completing its first season. In 2005 he appeared in the documentary short Magnificent Desolation: Walking on the Moon 3D and the video game Call of Duty 2.

In 2006 he appeared in the television features Three Strikes and The Path to 9/11. In 2007 he appeared in the television features Kings of South Beach and Company Man. He also guest starred in the Law & Order spin-off Law & Order: Criminal Intent and had a recurring role in the sixth and final season of HBO crime drama The Sopranos as Walden Belfiore. His character is a soldier in the Soprano crime family, with the distinction of committing the last murder in the series when he killed Lupertazzi crime family boss, Phil Leotardo. In 2008 he appeared in Robert Celestino's Yonkers Joe opposite Chazz Palminteri and Christine Lahti and in Jon Avnet's Righteous Kill opposite Robert De Niro and Al Pacino. He also appeared in NCIS: Naval Criminal Investigative Service. In 2009 he appeared in the television feature Bunker Hill and the series FlashForward. He also began a recurring role in the seventh season of 24 as Secretary of Homeland Security Tim Woods, featuring in seventeen episodes. He reprised the role for the eighth and final season in 2010, appearing in a further eight episodes. In 2011 he wrote, produced and appeared in the film Leave. He also had a role in the short AppleBox.

In 2012 he guest starred as Terry Powe in the FX series Justified third season episode "Cut Ties". Powe is a criminal turned reluctant informant in the witness security programme.

Retrieved from "https://justified.fandom.com/wiki/Frank_John_Hughes?oldid=21064"
Community content is available under CC-BY-SA unless otherwise noted.