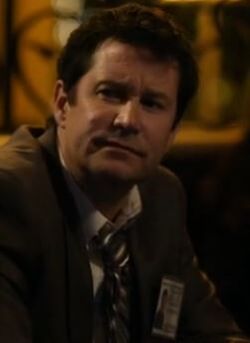 Gary Hawkins was a recurring character in the FX series Justified. Gary is the ex-husband of Winona Hawkins, who was formerly married to Raylan Givens. Gary is a real estate worker who ends up in a huge debt to the Dixie Mafia, but Gary manages to make up for it by giving Emmitt Arnett, the Dixie Mafia boss, the deed to his would-be "Supermall". Gary soon announces to Winona that he plans to divorce her to save on a mortage. Later, he orders a hit on Raylan by Wynn Duffy, which is foiled when Raylan kills the two hitmen. After Raylan finds out Gary was the one who called the hit, he tells Gary he is no longer going to save him from Duffy and orders him to flee. In "The Man Behind The Curtain", he has now relocated to Tulsa, Oklahoma under the new name Walter Parks. In "Watching the Detectives" he is shot to death in his and Winona's front yard by Robert Quarles as he tells him he needs him to deliver a message to Raylan Givens. Hawkins is portrayed by guest star William Ragsdale.

Gary's first appearance is in the episode "Fire In The Hole". Gary awakens to use the bathroom but Winona reminds him the upstairs one is broken so he goes downstairs. He then sees Raylan Givens in his living room and nearly has a heart attack.

In "The Collection", Raylan pays Gary a visit at his office and apologizes for bargining into house and questions him on why it shook him up. Gary tries to play it off but Raylan sees through this and after they are done talking Raylan warns him to keep Winona out of his shady business that has her worried.

In "Blowback", Winona calls him home after Wynn Duffy pays her a visit and Garys asks what happened. She tells him what he said and she tells him he was trying to sell a security system. Gary tries to act like he doesn't know the guy and that he might have been a junkie looking for a score but Winona doesn't buy it. She then tells him that she knows something is going on with him and he gets angry and yells at her. She then mentions the names she saw in his emails and Gary gets even angier when he realizes when that was the reason for Raylan's visit to his office. He then storms out without telling Winona whats going on and accuses her of being too nosey.

In "Hatless", Gary goes to visit his old high school friend Toby Griffin for help paying back the Dixie Mafia after he borrowed some money and is "overextended". Gary reveals to Toby that the people he owes money to even into his home and threatened Winona. Gary says that he owes them a lot of money (seven figures to be exact). Toby tells him that he can't do that for him, but does offer him muscle in order to help Gary get a little more time to have the money. Gary is reluctant at first, but agrees to let Toby help him. Together, they go down to Duffy's office to talk to him. Duffy says that he recognizes Toby, but he can't remember how he knows him. Toby in-and-out threatens Duffy, while Gary explains that he can double Arnett's money in twenty-four months. Duffy offers Toby the chance to back out, but Toby is enjoying his enforcer role too much to back down.

After they leave, Duffy and Billy Mac find Gary and beat Gary into paying his debt. He then tosses him Toby's ring and warns him that the next ring they give him will be Winona's. He rushes over to Toby's place to return him his Super Bowl ring and his wife answers the door where she berates him for getting Toby into this situation. Gary then see in horror how Toby is now in crutches and badly injured and apologizes to Toby and swears that those men will never come back there again. He then goes to the lot where the shopping mall was going to be and planned to kill himself for the insurance money. Raylan arrives and when Gary sees how injured he is he believes it is his doing but Raylan avails him of such worries and talks him out of killing himself. Raylan also convinces him that the land is not worth dying for and has the land signed over to Emmitt Arnett. This however doesn't go well with Duffy and Mac and in the impending shoot-out, Mac and Arnett's bodyguard are killed and Duffy is shot. Duffy goes to kill everyone else but Gary tackles him and Raylan manages to stop him before he can get his gun back. Raylan then drives Gary home back to Winona and they go inside.

In "Fathers and Sons", he is seen complaining to Winona about taking Ava Crowder into their home at Raylan's asking with Winona saying they owe him.

In episode 2 "The Life Inside" Gary stops Raylan outside his motel room saying he plans on winning Winona back. In episode 4 "For Blood of Money" Winona stops by estranged husband Gary's office at his request. She wants to know why he told Raylan he planned to get her back. He says he's never stopped loving her and also that he plans on not hiding anything from her anymore. "We need to get a divorce," he announces to her surprise. In episode 6 "Blaze of Glory" Winona confronts Gary about his latest plan to get them out of debt. Turns out Gary put up their house as collateral to buy a stake in a champion racehorse. Not surprisingly, Winona is furious.

In episode 7 "Save My Love" Gary pays a visit to Duffy who is not pleased to see him given how Gary indirectly got Duffy shot with the loss of some of his intenstine. Gary tells Duffy that he has come across an "exciting investment opportunity."

In episode 10 "Debts and Accounts" Winona asks Raylan to drive her to meet Gary at his lawyer's office. She is finally filing for divorce from Gary. On the ride over,they are followed by a silver Cadillac. Winona and Gary meet with their lawyers present. Later that night the two men in the Cadillac attempt to kill Raylan and Winona. Episode 11, "Full Committment", opens with Gary rushing into the marshals' office, yelling: "Where's my wife?" He then confronts Raylan, raging that he is far too dangerous for Winona, and that Gary can protect her. "The first step is to keep her the hell away from you!" Gary screams.

Raylan shoves Gary — and Gary shoves back. Art sends Winona and Gary home — and then tells Raylan that he will be shadowed by Tim. "He's going to stay with you until I can figure out exactly what happened tonight," says Art, who informs Raylan that he is not to investigate the men who attempted to kill him. Rachel is given the job of looking out for Winona at Gary's house. "It's wonderful to have you home," Gary tells his soon-to-be ex. and apologizes to her for various poor decisions. "I've made some terrible choices and I don't know why," he says. Winona, who has also recently made some terrible choices, is surprisingly sympathetic. Meanwhile Raylan's invesitgations rule out Mags from ordering the hit on him. Raylan arrives back at Winona and Gary's house with Tim. The mood is tense and everybody goes to bed except for Raylan, who notices somebody parked outside. Raylan sneaks outside and punches the man in the face and cuffs him to the wheel before finding a business card for a construction company. Raylan then calls Dan, asking him to run a check on the company.

Moments later, Raylan wakes up Gary by grabbing him by the throat. Turns out the construction company is owned by Duffy's sister — and Gary ordered the hit on him and Winona. "I tried to call it off!" cries Gary. "Do you have any idea what it's like to think of her being with you?" Raylan then informs Gary that the best chance he has is helping Raylan get to Duffy before Duffy gets to any of them. So Gary calls Duffy, who agrees to meet with him. Duffy tells an underling to prepare to deal with Gary by putting plastic sheeting up inside the construction site trailer. (Someone's been watching Dexter.)

Later, everybody meets — with Raylan holding Duffy's man Mike hostage at gun point. Raylan trades barbs with Duffy and then informs Gary that he has no intention of saving him from being murdered by Duffy. "I would leave the country, but that's entirely up to you," Raylan says. "As long as we never see you again." Gary hesitates — and then flees. Raylan warns Duffy that "the next time we have this conversation, there won't be a conversation" before leaving, too.

Raylan returns to Winona's house to find Tim waiting. Tim asks Raylan if he found out who was behind the hit. Raylan doesn't tell him or, we find out later, Winona.

In "The Man Behind The Curtain", Gary has now relocated to Tulsa, Oklahoma under the new alias "Walter Parks", attempting to start a new life and get away from the Dixie Mafia. Gary pitches a seminar to a less than enthusiastic crowd about how with positivity and a good personality, they can turn that into profit. Gary tells a woman in the audience that for $29.95, she can buy his step-by-step manual, but another man in the audience believes it to be a pyramid scheme. Robert Quarles, who is in the audience, manages to help the stumbling Gary through the rest of his seminar. The two are seen having a drink at the bar, while discussing their personal lives. Soon, Mike comes in and a drunken Gary asks if he knows him. Wynn Duffy comes on the other side of Gary and says "Yes, Gary you do". A shocked and confused Gary exchanges glances between the two men.

In "Watching the Detectives", he is taken to his soon to be ex-wife Winona's front yard by Robert Quarles, Wynn Duffy, and Mike. He is then escorted out of the trunk of a car by Duffy and Mike as Quarles tells him he needs him to deliver a message to Raylan Givens, Gary asks if he is taking him home. Duffy replies "In a way, Gary." Gary asks Quarles what message as Quarles shoots him to death. His body is later discovered by Raylan as he drives up to the crime scene.