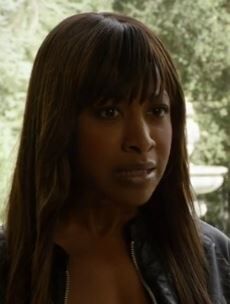 Gloria is a recurring character in the fifth season of the FX series Justified. Gloria is the maid and lover of Charles Monroe, who is an accomplice in the hidden gold. Gloria is portrayed by guest star Gabrielle Dennis.

In "The Kids Aren't All Right", she is seen when Charles is arrested by the US Marshals, where Charles proclaims that she isn't his girlfriend, but she is his maid that helps with his more private matters.

In "Good Intentions", Monroe interrogates Gloria under the belief the man that threatened Raylan Givens at the estate was an accomplice of Gloria's, trying to steal the gold from the house. Nearly strangled and suffocated to death, Gloria maintains her innocence, instead suggesting the gold could have stolen by Wynn Duffy, who installed the hidden safe. Monroe tells her to go to the estate and take the gold from the safe, despite the Marshals living there. However, she is caught by Raylan and Rachel Brooks as she is stealing the gold, and is pressured by them to tell Monroe the safe was empty.

Retrieved from "https://justified.fandom.com/wiki/Gloria?oldid=22055"
Community content is available under CC-BY-SA unless otherwise noted.