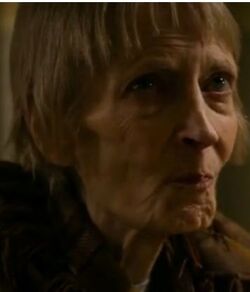 Berwind's family owed a huge debt to the Bennetts since Berwind's uncle Stink impregnated Mag's cousin Gracie and decided not to have anything to do with the child. Gracie's brothers were going to kill Stink, but Mags and Grandma Berwind made a peace offering.

In "Reckoning" she's uncredited and unnamed; as "Old Woman", she is paid off by Mags and visits Jed in jail shortly before he recants his original statement and causes Dickie Bennett to be released.

In "Guy Walks Into a Bar", it is revealed she has suffered a stroke and is unable to communicate orally, but instead communicates by pointing at letters and pictures in a book. Raylan visits her to get her to testify against Dickie, but she instead requests two milkshakes. She ends up dumping one of the two milkshakes onto Raylan's lap, being less than cooperative with him.

Retrieved from "https://justified.fandom.com/wiki/Grandma_Berwind?oldid=22024"
Community content is available under CC-BY-SA unless otherwise noted.