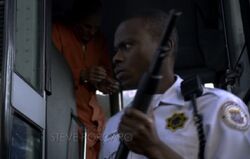 Guard on Walkie, played by co-star Richmond Duain Martin, is an unnamed supporting character in the FX series Justified first season episode "Riverbrook". He is one of the guards supervising the work release of convicts from Kentucky State Prison to play in a band at a birthday party. During the concert two of the prisoners escape.

Retrieved from "https://justified.fandom.com/wiki/Guard_on_Walkie?oldid=17457"
Community content is available under CC-BY-SA unless otherwise noted.