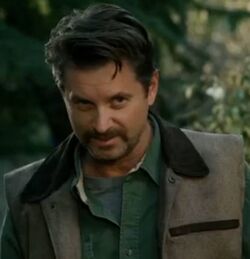 Hagan was a recurring character in the sixth season of the FX series Justified. He is a pedestrian taken hostage by Boyd Crowder so that he can access the mountains unnoticed to search for Ava Crowder. He is portrayed by guest star Shea Whigham.

In "Fugitive Number One", Boyd Crowder eyes a red truck. Turns out it was Hagan driving, even though actor Shea Wigham went uncredited.[1]

In "Collateral", Boyd pulls over Hagan and holds him at gunpoint, wanting a ride. Boyd stays over at Hagan's house, who informs Boyd that he is well aware of his notoriety and outlaw status, seeming to be starstruck by the criminal, providing him with a new set of clothing and even giving away his own truck, but Boyd refuses and instead wants Hagan to drive him up to the mountains. After a conversation in which Hagan mentions the name "Hut McKean" and sends Boyd off on a rant, Boyd shoots Hagan in the head and pursues after Ava, who has fled after hearing the gunshot.

Retrieved from "https://justified.fandom.com/wiki/Hagan?oldid=22102"
Community content is available under CC-BY-SA unless otherwise noted.