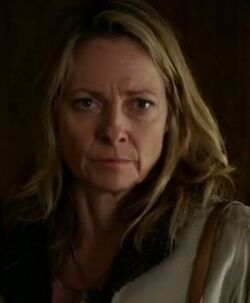 Hanna is the estranged sister of former Harlan County Sheriff Tillman Napier. The two had not spoken in nearly 15 years due to a fall out after Hanna stole from their mother (it is never stated what was stolen, but it could have been money). Furthermore, Hanna hasn't spoken to her brother because he never tried to contact her while she was in a huge debt with medical bills after being hospitalized.

In "Guy Walks Into a Bar", she arrives to her house to find Boyd sitting in her kitchen. Hanna tells him that she knows that Boyd is the one who is backing Shelby against her brother Tillman in the election. Hanna reveals that she had not spoken to him in nearly 15 years due to a fall out after Tillman wouldn't return her phone calls after she was in a huge debt from medical bills after being hospitalized. Hanna, thinking Boyd has come to harm her, says that Tillman will not care if he slaps her around. Boyd rather wants to offer Hanna a job (To agree to be on County Clerk Harvey Jones's payroll). Due to her being on Harvey's payroll, it forces the newly re-elected Tillman to relinquish his title of Harlan County Sheriff to the runner-up in the election (Shelby) since it is election rules that a family member cannot be on the payroll of a County Clerk.

Retrieved from "https://justified.fandom.com/wiki/Hanna_Napier?oldid=17546"
Community content is available under CC-BY-SA unless otherwise noted.