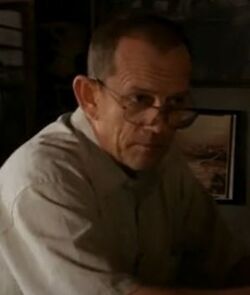 Harvey Jones is a supporting character in the FX series Justified third season episode "Loose Ends" and "Guy Walks Into a Bar". Jones is hired by Ellstin Limehouse to become Robert Quarles's campaign manager in order to ensure that Tillman Napier is re-elected as planned. Jones is portrayed by co-star Ezra Buzzington.

Jones is a county clerk hired by Limehouse to assist Robert Quarles in the re-election of current Harlan sheriff Tillman Napier.

In "Loose Ends", he discusses his plan to "fix" the votes so that Tillman Napier is re-elected, but that they have to be careful with it because the VFW is pretty quick to know a fix when they see it. He says that they will make sure that during the debate, Napier will score with the crowd but he will gavel out before Shelby has a chance to respond back. Harvey gives Napier the upper hand in the debate, but soon Boyd arrives and manages to help Shelby's case out by explaining that Shelby was implicated in a robbery by the hated Blackpike Coal -- and who would believe that dishonest firm? The charismatic Boyd soon has the crowd in a frenzy. "I'm not saying you're a bad man, Mr. Napier, but I do know that you've been feeding too long at the public trough!" Boyd says. The crowd cheers. Harvey pounds his gavel, but it's drowned out.

In "Guy Walks Into a Bar", Jones is now hired by Ellstin Limehouse to assist Boyd Crowder's side in the election against Napier. After Napier wins re-election and is celebrating in his office with Robert Quarles, Shelby and Jones show up where Jones delivers some bad news to Napier. Due to Napier's estranged sister Hanna being on his payroll, election rules state that Napier has to relinquish his title of Sheriff to the runner-up of the election.

Retrieved from "https://justified.fandom.com/wiki/Harvey_Jones?oldid=17472"
Community content is available under CC-BY-SA unless otherwise noted.