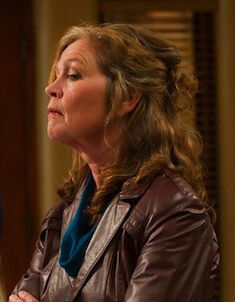 Helen McKinley Givens was a recurring character in the FX series Justified. Helen was the sister of Arlo Givens' first wife, Frances Givens; after Frances' death, she married Arlo. She was also Raylan Givens' step-mother and aunt. Helen seems to have a better relationship with Raylan than Arlo does, due to her standing up for him and treating him more like a son than Arlo does. Helen was killed in the Season 2 episode, Full Commitment by Dickie Bennett during a standoff in her kitchen. Helen later appears in a vision to Arlo in the Season 3 episode "Coalition". Helen is portrayed by guest star Linda Gehringer.

Helen was born and raised in Harlan, Kentucky. Not much is known about her past life before her sister Frances married Arlo Givens. Due to the fact that Frances died early on in Raylan's life, Helen married Arlo in order to give him a "mother figure" in his life. Helen raised Raylan from then on like he was her own son and not her nephew. It is unknown if Helen had any other children or was ever married because it was never stated in any of the episodes. Helen frequently clashes with Arlo due to his criminal behavior and his association with the Crowder family. Helen did not want Raylan to end up going down the same road as Arlo, so she paid for Raylan to leave Kentucky so that he didn't end up a "cold-blooded killer." Helen is also a very tough woman with little intimidation, who frequently carries around a shotgun in case something goes wrong or if she senses an intruder.

Helen first appears in the episode "The Lord of War and Thunder." Raylan recalls frequently running away from his abusive father to his Aunt Helen's place, where she let him watch TV shows he couldn't see at home; Aunt Helen was the first person he ever knew with cable television. Helen meets up with Raylan at a diner, begging him to bail Arlo out of jail. Raylan refuses to but after more coaxing and begging from Helen, he agrees to do it but only because she asked him to. Later on, Stan Perkins and his "nephews" show up to Arlo and Helen's house looking for Arlo, who he claims stole something valuable to him. Helen proceeds to attack him with a knife when he mentions killing Arlo, but she ends up violently tackled to the floor by one of the "nephews".

Helen has a brief appearance in the episode "Blind Spot". At the beginning of the episode, she appears with a shotgun pointed at Johnny Crowder who has been harassing Ava at a hardware store, forcing him to leave.

Art Mullen and Raylan visit her in the episode "Veterans". Raylan tells her they know about Arlo's business endeavors and Helen makes a snappy remark towards Raylan, but hushes when Raylan tells her Bo Crowder will come looking for the money Arlo lost. Helen listens in during a meeting Arlo and Bo have, armed with a shotgun.

Ava comes to Helen in the episode "Fathers and Sons" asking for a shotgun due to the fact Bo is coming after her, which she agrees to do, although she warns Ava that Bo won't take kindly to her taking out Crowder thugs with a shotgun.

Helen appears in the episode "The Life Inside". It's revealed in this episode Helen has kicked Arlo out of the house due to him attempting to kill Raylan, despite the fact Arlo is on house arrest. Helen warns Raylan to stay away from Mags Bennett.

Boyd attempts to make a deal with Helen and Arlo in "The Spoil" because Black Pike is wanting to acquire their land, however, Helen and Arlo both refuse to sign over the land to them. Later on, Carol Johnson and Raylan show up because Carol wants to try again to get them to sign the land over. Helen offers Raylan $20,000 that was stolen from the Marshals if he leaves Kentucky and cuts all ties. The chat gets interrupted by a sniper that is firing shots at them. Helen goes into the kitchen, standing by the window with a shotgun. Helen is almost shot and killed, but Raylan manages to come up and tackle the sniper to the ground, which turns out to be Sally Peener from the episode "Save My Love".

Helen meets with Mags in a diner in the episode "Debts and Accounts". Helen gives Mags her share of the mining company, as well as asking Mags not to break the peace between the feuding families saying that Raylan had a job to do: protecting the girl.

Helen's final live appearance in the second season is the episode "Full Commitment". Helen hears a noise in the kitchen and goes to check it with her shotgun in hand. Helen finds Dickie Bennett and Jed Berwind in the kitchen, who are looking for Arlo. After a little more discussion, Helen attempts to shoot them, but winds up being shot to death by Dickie.

After Helen's death, in "Reckoning", Arlo tells Raylan, "No disrespect to your mother, but the last 15 years [were] the best of my life."

In "Coalition", Helen appears in a vision to Arlo, scolding him over allowing Boyd to sit him out of the bank heist while Dickie Bennett (who murdered Helen) sits in Johnny's bar.