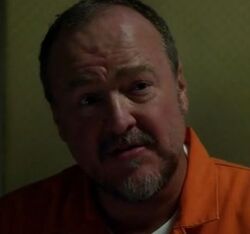 Hunter Mosley is a recurring character in the FX series Justified. Hunter is the former Sheriff of Harlan who was incarcerated due to his involvement in the hit on Raylan Givens in the episode Blind Spot. Hunter has a long running feud against the Crowder family, due to the fact Henry Crowder raped and strangled Hunter's ten-year old niece and he has been in pursuit of Henry ever since. Hunter is portrayed by guest star Brent Sexton.

Hunter was the Sheriff of Harlan who has a hatred for the Crowder family, due to the fact that Henry Crowder raped and strangled Hunter's ten-year old niece. When Hunter couldn't find Henry he contacted Gio Reyes to help find him and in exchange he would allow the Miami drug cartel to run drugs through Harlan at a reduced price. After Henry was delivered to Hunter, Henry was executed and Hunter sent Bo Crowder to prison in order for Hunter to run the drug trade. Because of those actions, he was able to cut meth trafficking in half. During this time he arrested various drug dealers like the Stoll brothers who were selling black tar heroin and Chris Lytle who was selling pot across the state lines.

Hunter's first appearance is in the episode "The Lord of War and Thunder". Hunter stumbles upon a passed out Arlo Givens, who is sleeping on a couch at Stan Perkins's house. Hunter finds out that Arlo had smashed all of Perkins stuff in the house due to him being late on his rent (Arlo owns the house that Stan has rented out). Hunter tries to get the two to make amends, but Stan ends up being kneed in the groin by Arlo, who tells Stan to pay his rent. Hunter then takes Arlo to jail because of his actions.

Hunter's next appearance is in the episode "Blind Spot". In this one, Hunter's role is larger than his previous appearance. Hunter and Raylan go to question Johnny Crowder, who Raylan believes was behind the previous shooting at Ava's place (Due to the fact that Bo wanted Ava dead). On the way to the bar, Hunter explains to Raylan that Henry Crowder raped his 10 year old niece and he's been after him ever since, and the Crowder family knows it. A seemingly enraged Hunter manages to get Johnny to lift up his shirt (with assistance from Raylan) to check for wounds, and although Raylan realizes it wasn't Johnny, Hunter pushes the issue. Later on, Hunter visits Red and Mr. Duke, the hitmen that were supposed to kill Raylan (Red being the one that Raylan had shot). Hunter tells Mr. Duke that they need to put Raylan down from a distance, but Mr. Duke said he was given very specific orders. Hunter shoots Mr. Duke dead, and tells Red the Miami cartel isn't going to like that the hired gun is killed, but they will give the cartel Raylan instead. Hunter and Red kidnap Ava as a way to lure Raylan into coming to find her. Hunter makes Raylan drop all of his weapons, and forces him to drive his police cruiser to follow the van with Ava. Hunter threatens to kill him if he sees any other Marshals. Hunter explains that the cartel gave him Henry Crowder a couple of years ago and they had him runs drugs through Harlan at a reduced price of what Bo was asking. He goes on to tell him that he recruited Red for the hit on Raylan and that Miami gave Mr. Duke the green light to tie up any loose ends, which included Hunter and that's why he killed him. Ava ends up freeing herself from her bonds and strangles Red causing them to swerve all over the road. Raylan takes advantage of the situation, and reaches back in the seat to disarm Hunter, breaking Hunter's wrist in the process. Hunter is then forced to handcuff himself to the steering well.

Due to Hunter's arrest, many of the criminals he had arrested were freed from prison, one of those being Bo Crowder.

Hunter's final appearance in the first season is in the episode "Veterans". Raylan visits him in prison to learn that while Bo was in prison, Arlo took over the collection and protection duties, but Arlo ran the business into the ground.

In "Outlaw", Raylan visits him at Trumbull, offering him the same deal he had offered Arlo. Hunter is surprised that Raylan wants to offer him a deal, considering he tried to kill him. In prison, Hunter has a corrupt prison guard give him access to Arlo Givens, who lays in a catatonic state in a barber chair. The plan is that it will look like Arlo was stabbed in a scuffle, and the guard broke it up. When Hunter goes to grab a pair of shears, Arlo is revealed to have faked his catatonic state and hits Hunter in the face with a canister of hair tonic before brutally hitting him. The guard comes in and Arlo attacks him as well. Hunter uses the distraction to catch Arlo off-guard and stab him in the chest with the shears.

In "The Hatchet Tour", Hunter is moved from Tramble and placed in the custody of Raylan for his transfer to a supermax prison, much to his chagrin. Raylan visits Wynn Duffy in his motorcoach with Hunter Mosley in tow. Raylan believes that Duffy used Hunter to initiate the hit on Arlo, but does inform Duffy that Hunter may be the only person alive who knows Drew Thompson, which interests him. While on the road, Hunter jumps out of the car, refusing to talk about Drew. Hunter attempts to commit suicide by jumping in front of a tanker truck, but Raylan pulls him out of the way. Raylan punches Hunter in the face three times before departing. Shelby Parlow arrives and rides with them to question Lee Paxton and Gerald Johns. While Raylan is on the inside with Bob Sweeney talking to the two men regarding Drew Thompson, Shelby talks with Hunter, who is handcuffed in the back of Raylan's car. It turns out that Shelby is really Drew Thompson, and he thanks Hunter for his years of silence. Shelby gives Hunter keys to unlock his handcuffs before fleeing in Bob's police cruiser. Hunter does not escape though and has a talk with Raylan after being turned over to the police, telling him that if he listens to what Frances taught him, he might turn out alright.