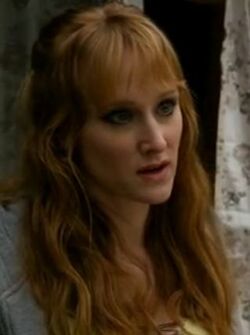 Jennifer J. Corliss was a recurring character in the third season of the FX series Justified. She is a former stripper at Audrey's and one of Delroy Baker's working girls, who overhears Ava Crowder's conversation with him.  In "Loose Ends" she is killed by Delroy, who is attempting to cover his tracks when one of his prostitutes, Krystal, is shot and killed during a failed robbery. J.J. is portrayed by guest star Willow Geer.

Corliss attended middle school with Ava, where she was a grade up under her. Corliss dropped out of middle school soon after and never made it to high school.

In "When the Guns Come Out", Corliss is seen inside Audrey's when Ava is looking for Ellen May and later meets with Ava outside. They catch up with who they are and Corliss warns Ava not to go to Delroy's trailer to find Ellen May because Delroy will attack her as well. She then asks Ava if her wanting to talk to Ellen May has anything to do with what she witnessed in the clinic.

In "Loose Ends", She Ellen May and Krystal, on Delroy's orders, put on wigs and proceed to rob a cash and check store with shotguns. Unfortunately one of the customers grabs Corliss' gun and uses it to shoot Krystal while Krystal gets off two shots killing the customer and clerk. She and Ellen May grab Krystal and make a run for it and get in Delroy's van and they drive off. Along the way she keeps crying as Krystal passes away from her injuries and they take her to a slurry to get rid of the evidence. Delroy then turns around and shots Corliss in the chest, killing her.

Retrieved from "https://justified.fandom.com/wiki/J.J._Corliss?oldid=18440"
Community content is available under CC-BY-SA unless otherwise noted.