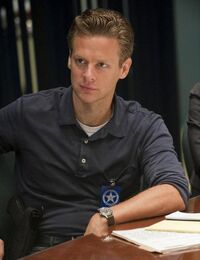 Jacob Pitts is an American actor, and he currently resides in Los Angeles, California. His most notable performance was in the film EuroTrip as Cooper Harris. He appeared in the play Where Do We Live at the Vineyard Theatre in May 2004. Pitts has also appeared in popular TV shows such as Law & Order in 2000 where he played John Telford, Sex & The City (2000) where he played Sam Jones, and Ed where he played Johnny Malone. Pitts grew up in Weston, Connecticut. In high school he was very involved in the theater production company, and took part in all the productions while he was in school, including a performance as the Mysterious Man in Into The Woods. Pitts began his career when he made his TV debut in 1999, and he appeared in an episode of Comedy Central's sitcom Strangers with Candy. He then went on to the New York Broadway stage in 2000, when he played Fleance from the Shakespearean play Macbeth. After his Broadway production, he was casted to appear in an episode from Law & Order and Sex and the City. In 2004, he played a major role in Eurotrip, which was one of his first big-time castings. When he acted in Eurotrip, he was paid $100,000. The next most recognized movie and his second studio feature was 21. In 2006, Pitts was interviewed and one of the questions was, "What is your inspiration for acting? Why do you do it?" Pitts responded, "Money. Very, very occasionally a piece of writing comes along that I personally connect with, that really twists something in me, that I will have nothing but the most fervent dedication to. In that case, I do it just for the gratification of being involved with the piece, just to say I was there. But like I said, that's about .01% of the time. Not that I'm complaining-- when it's otherwise, I'm very well overpaid." Overall, Jacob Pitts has acted or appeared in 19 different productions.

Retrieved from "https://justified.fandom.com/wiki/Jacob_Pitts?oldid=18254"
Community content is available under CC-BY-SA unless otherwise noted.