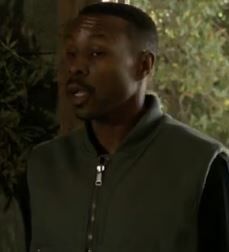 Jay is a recurring character in the fifth season of the FX series Justified. Jay is a drug enforcer working for Rodney Dunham and the brother of Roscoe. Jay and his brother began working for Johnny Crowder after he bought their loyalty using the cut from their very first drug heist. He is portrayed by guest star Wood Harris.

In "The Kids Aren't Alright", Roscoe and Jay rough up a fellow henchman who got stiffed in a weed deal by two teenagers. Their boss, Rodney Dunham, orders Roscoe and Jay to kill the man and he sends them off to find the teenagers and the money. They break into Derek Waters's house and prepare to interrogate them until Raylan Givens arrives. Later that night, they kidnap Derek and have him dig up the money that him and Loretta McCready, his girlfriend, buried but it becomes clear that Loretta moved the money behind Derek's back when he can't find it. Before they can execute him, Raylan intervenes and subdues Roscoe with a shovel. Both men warn Raylan that he better leave before Dunham arrives.

In "Raw Deal", Jay calls Johnny in Mexico, saying that Dunham claims to have no money in the bank account and that Johnny is in possession of it all, but that he has no problem interrogating him.

In "Wrong Roads", Roscoe and Jay are seen at Dunham's compound when Alex Miller, Raylan and Henkins arrive, looking for Dunham. Roscoe and Jay tell the men that they haven't seen Dunham either, but Miller leaves Henkins to sit on Roscoe and Jay as they leave to find Dunham since he doesn't believe either Roscoe or Jay. The men attempt to mess with Henkin's head by assuring him he is just Miller's lackey, and he tells the men about Boyd Crowder murdering Dunham's men down in Mexico, where they were found with heroin near their bodies. Roscoe and Jay, using the "hammer and anvil" technique, knock Henkins unconscious and chain him up to the ceiling so that they can get to Kentucky. Roscoe and Jay interrogate Boyd's bartender, Caleb, who tells them that Boyd is at Audrey's. Roscoe and Jay interrupt the meeting between Ethan Picker, Wynn Duffy, Boyd and Daryl Crowe Jr. Once Raylan and Miller arrive, Roscoe begins reciting King Lear before attempting to draw his gun, where he is promptly shot down by Miller. Jay is left devastated by the shooting, but sits his gun down on the table. Jay is then arrested by the police.