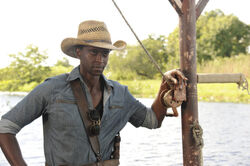 Jean Baptiste is a recurring character in the fifth season of the FX series Justified. Baptiste is a gator hunter and associate of Daryl Crowe Jr. and the rest of the Crowe family based in Florida. In "Shot All to Hell",  he is shot and killed by Danny Crowe.  Baptiste is portrayed by guest star Edi Gathegi.

Baptiste is a gator hunter and associate of the Crowe family based in Florida. It is likely that he is also responsible for the disposal of bodies (particularly Simon Lee and Dilly Crowe). He is depicted as being fiercly loyal to Daryl Crowe Jr., intelligent, and having an extremely calm demeanor during situations (such as when he threatens Danny in "Shot All to Hell").

In "A Murder of Crowes", he is first seen being questioned by US Marshals Greg Sutter and Raylan Givens. He calls Daryl to warn him of the Marshals visit soon after they gone. He also suggests to Daryl that he should return to Kentucky.

In "Good Intentions", he is seen briefly along with Danny Crowe in a back room at Audrey's, where a battered Wade Messer is seen with half of his body inside of a dryer. Baptiste is seen in a rocking chair chewing bubble gum.

In "Over the Mountain", he is seen at Audrey's, advising Danny against killing Raylan because if that were happen, they would have to leave Kentucky with a target on their back. Raylan later shows up at the bar to detain Kendal under state mandate, as he is a minor working in a bar. Daryl, Baptiste and Danny all stand up, prepared to defend Kendal until he voluntarily surrenders.

In "Shot All to Hell", he is seen at Boyd's bar with Daryl as they demand a more accurate sale price for Audrey's. Later, he threatens to kill Danny by challening him with the "21 foot rule" when Danny doesn't get a list of food that Wendy Crowe has requested. Danny walks away, reaches over the bar, pulls out a shotgun, and fatally shoots Baptiste.