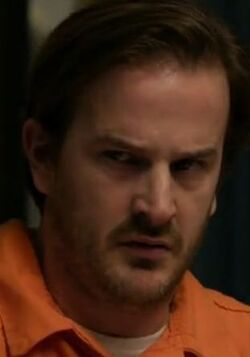 Jed Berwind is a recurring character in the second and third season of the FX series Justified. Berwind is a longtime associate of the Bennett family, whom Dickie Bennett offers a spot as his business partner when Mags Bennett steps down from the marijuana business. Berwind is portrayed by guest star Richard Speight Jr.

Berwind is a longtime associate of the Bennett family. Berwind's family owed a huge debt to the Bennetts since Berwind's uncle Stink impregnated Mag's cousin Gracie and decided not to have anything to do with the child. Gracie's brothers were going to kill Stink, but Mags and Grandma Berwind made a peace offering.

In "Debts and Accounts", Dickie offers Jed a position as his business partner in the marijuana business. Berwind happily accepts the deal since he has to support his family.

In "Full Commitment", Dickie, Jed, and two other of Dickie's henchmen are robbed of their weed by Boyd Crowder, Devil, and Arlo Givens. Dickie, noticing Arlo's limp, decides to go after him. However, two of Dickie's henchmen decide to bail on him prompting Dickie to kill them both. Jed stays loyal to Dickie and decides to help out. However, they find Helen Givens waiting for them with a shotgun. Helen manages to shoot at Jed before she is shot and killed by Dickie.

In "Reckoning", Doyle Bennett decides to kill Jed in order to cover Dickie's tracks in Helen's murder. Raylan shows up and reveals that he knows Doyle is going to kill Jed so that Dickie walks free, saving Jed's life. Jed then confesses that Dickie killed Helen to Raylan -- and promises to say so in court if his family is kept safe. "For what it's worth, it wasn't supposed to be her," says Jed, explaining that the pair was there to kill Arlo for what he and Boyd had done to Dickie. Later, a cop visits Givens at Arlo's house and delivers some bad news: after that unidentified old woman (Jed's grandmother) visited Jed in prison, he recanted his testimony causing Dickie to be released.

In "Guy Walks Into a Bar", Jed is brought into the Marshal's office since Raylan needs someone to testify to keep Dickie behind bars. Raylan offers Jed a pizza, and wants him to change his statement back to the original one where he confessed about Dickie being behind the murders. Jed then proceeds to tell him the story of the family history between the Berwinds and the Bennetts. Raylan says that there are no more Bennetts, just Dickie. However, Jed tells Raylan that if he can make his grandmother talk to him, that he will talk as well.

Retrieved from "https://justified.fandom.com/wiki/Jed_Berwind?oldid=21618"
Community content is available under CC-BY-SA unless otherwise noted.