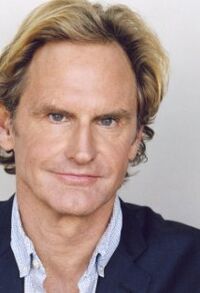 Name
Jerald Eugene Burns
Birthplace
Cambridge, Massachusetts, USA
Birthdate
October 15, 1954 (1954-10-15) (age 65)
Character
Wynn Duffy
IMDB profile
Jere Burns - born Jerald Eugene Burns on October 15, 1954 (1954-10-15) (age 65) in Cambridge, Massachusetts, USA - is an actor. He stars as Wynn Duffy in the FX series Justified. He was a member of the recurring cast during Season 1 to Season 4. He has been a member of the starring cast since the Season 5 premiere "A Murder of Crowes".

Burns was born in Cambridge, Massachusetts, the son of a homemaker and a gown and cap manufacturer. Burns was drawn to acting late in college. After graduating from the University of Massachusetts Amherst in 1980 Burns moved to Manhattan and was cast in the title role in Don Juan at the New York Shakespeare Festival.

Burns has been acting in film and television since 1984. He is best known for his role as ladies' man Kirk Morris on the television series, Dear John.

Burns made his television debut in a small role on ABC's Mom's On Strike in 1984. He had a recurring role as pathological rapist James Fitzsimmons on Hill Street Blues and body collector Breugel on Max Headroom. In 1988 he landed the plum role of sleazy Kirk Morris on Dear John. In 1989 he appeared in the William Lustig film Hit List as Jared Riley. He appeared as the villainous Cade Dalton on the NBC miniseries The Gambler Returns: The Luck of the Draw (1991), hateful Vice-President of Sales Pete Schmidt on Bob (1993), a member of the feuding family in Greedy (1994), Jack Farrell in Something So Right (1996), Ben Stuart (father to Lindsay Lohan's character) in Life-Size a made-for-TV film (2000) starring Tyra Banks. He acted as: Harry's brother in The Trouble with Harry; an episode of the series Twice in a Lifetime directed by David Winning (2000); Frank Alfonse on Good Morning, Miami (2002); Michael on Help Me Help You (2006); and Dr. Jim on Surviving Suburbia (2009). He starred as an FBI agent in a movie Otis (2008). Other screen credits include Crocodile Dundee in Los Angeles (2001).

In 2010 he appeared in AMC's series Breaking Bad as the group leader for a Narcotics Anonymous meeting as apart of a Twelve-Step Program, which main character Jesse Pinkman attended (fellow Justified co-stars Damon Herriman and Myk Watford both made appearances on Breaking Bad as well). He played villain Anson Fullerton in the fifth (2011) season of Burn Notice on USA Network.

In 2013, Burns had a four-episode recurring role in the A&E series Bates Motel as Jake Abernathy.

Retrieved from "https://justified.fandom.com/wiki/Jere_Burns?oldid=20787"
Community content is available under CC-BY-SA unless otherwise noted.