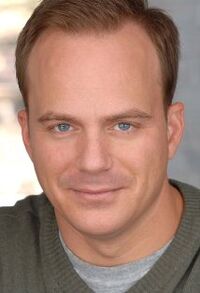 Jeremy Denzlinger - November 24, 1973 (1973-11-24) (age 47) - is an American actor who co-stars as prison guard Henry Sladinski in the FX series Justified first season episode "Riverbrook". He had a recurring role in the first season of True Blood as Wayne. He has also appeared in Eleventh Hour, The Unit, Three Rivers, Gary Unmarried, Sons of Anarchy, The Mentalist, NCIS, The Young and the Restless and Boss.

Retrieved from "https://justified.fandom.com/wiki/Jeremy_Denzlinger?oldid=10647"
Community content is available under CC-BY-SA unless otherwise noted.