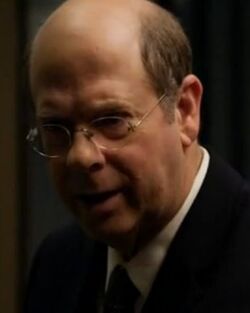 Jerry Barkley is a recurring character in the FX series Justified. He is high-ranking FBI Agent who was surveying Sammy Tonin, as well as looking into his case because he knows that Raylan is looking for him and wants to make sure that Raylan doesn't do anything brash. He is also trying to incriminate Raylan on charges of bribery and conspiracy, believing him to be a dirty cop funded by Boyd Crowder. It is later revealed in the next season that Barkley himself was in fact the dirty cop. Barkley is portrayed by guest star Stephen Tobolowsky.

Barkley was high-ranking FBI Agent (Special Agent in Charge of FBI Detroit office) , who is looking into the case of Sammy Tonin and Tonin Crime Family, and also believes that Raylan is a dirty US Marshal.

In "The Man Behind The Curtain", Barkley first appears at the Marshal's office. Barkley orders Raylan Givens, Art Mullen, and Tim Gutterson to back off of Sammy Tonin's case and stay away from him. Barkley then orders another FBI Agent named Susan Heller to alert him if she sees Raylan while she is keeping surveillance at a horse race arena.

In "Watching the Detectives", he shows up at Mike Reardon's courtroom, and talks to David Vasquez asking for the file that Vasquez made on Raylan during his investigation during season one. He soon shows up at the Marshals' office and tells Detective Gary Dempsey to wait his turn because he wants to investigate Raylan. Barkley tells Art that after investigating Vasquez's file, he noticed a long pervasive pattern of corruption. Art tells him that he has never gotten a whiff of dirty from Raylan, and Barkley says to Art "Maybe that says something about you chief". Barkley tells him that he can either assist or resist in this inquiry but if he resist, they may have to out him under a microscope. Art laughs the threat off, but Barkley brings up Walter Vondas who Art punched several times in "Cut Ties" in order to get information out of him. Barkley believes that ever since Raylan came back to Kentucky, that he has been working for (and paid by) Boyd Crowder. Art asks Barkley what made him want to look into Raylan and Boyd's case, which makes Vasquez curious as well. Barkley however will not disclose his source, which causes him to be unable to pursue an indictment. Barkley tells Raylan it doesn't mean that he isn't dirty before walking off.

In "Kin", Barkley comes into the Marshals office, angered that the Marshals have now acquired all the case files on Drew Thompson after petitioning the Department of Justice. On his way out, he bumps into Raylan, believing Raylan was behind the Drew Thompson case being turned over to the Marshals, and once again accuses him of being dirty. However, Barkley turns out to be dirty when he is seen in Wynn Duffy's trailer, where he is visited by Nick Augustine, an old friend and henchman for Theo Tonin. While the two start off reminscing, the conversation turns sour when Augustine reveals his knowledge that the FBI lost control of the Drew Thompson case. Augustine shoots Barkley in the head.

Retrieved from "https://justified.fandom.com/wiki/Jerry_Barkley?oldid=21801"
Community content is available under CC-BY-SA unless otherwise noted.