Edit
watch 01:36
We're Getting Mutants in the MCU - The Loop
Do you like this video?
Play Sound
Jimmy Tolan 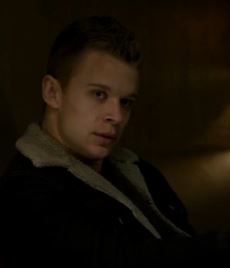 Jimmy Tolan, played by guest star Jesse Luken, was a recurring character in the FX series Justified. He is recruited by Johnny Crowder to help the Crowders take control of crime in Harlan County. He poses as a customer in Buck Mulligan's bar. When Boyd Crowder comes to extort ownership of the bar from Mulligan he provides back-up and disarms Mulligan's men when they draw their weapons. Although Johnny leaves from being a member of Boyd's crew near the end of the fourth season, Jimmy remains a member of the crew up until his death in the fifth season finale, "Restitution".

In "Harlan Roulette", He is recruited by Johnny Crowder to help the Crowders take control of crime in Harlan County. He poses as a customer in Buck Mulligan's bar. When Boyd Crowder comes to extort ownership of the bar from Mulligan he provides back-up and disarms Mulligan's men when they draw their weapons.

In "Thick as Mud", he is seen frisking both Doc Stern and Robert Quarles during their meetings with Boyd.

In "Measures", he accompanies Boyd when he vists Tillman Napier and assists Boyd in forcing Napier to help them trap Quarles after Quarles kills Parker and Longbaugh (two drug dealers that Boyd had been offering protection, and Quarles had killed after a tip from Napier). After Boyd manages to lead Quarles into a trap and tase him unconscious, Boyd orders Jimmy to chain Quarles to the bed.

In "Coalition" Jimmy goes into the back room at Audrey's to find a high Quarles, Cat, and Minerva. Jimmy says that there are customers waiting, but gives the women and Quarles five more minutes after Quarles pleads. Cat finds herself with Quarles' chain around her neck, and Quarles orders Minerva to call Jimmy inside. Quarles escapes, but bonds the three of them together. Raylan Givens soon discovers the three who have no idea where Quarles is headed, and Raylan leaves the three of them chained together after saying that they are better off that way.

In "Slaughterhouse" he is seen with Boyd, holding a gun on the bridge during his meeting with Limehouse.

In "Hole in the Wall", Colt comes into the bar looking for Boyd. Both Johnny and Jimmy deny knowing who Boyd is. Colt, however, notices that Jimmy is a bad liar just from reading his eye movements (something he learned from his days as a military police officer).

In "Truth and Consequences", Jimmy and Colt are sent to Billy's tent after Cassie rejects Boyd's bribe. The two hear hissing, and Jimmy is ambushed by several of Billy's snakes, one of which latches onto his cheek. Colt takes Jimmy back to the bar, with the decapitated head of the snake still attached to his cheek. A doctor is called to check him out.

In "Get Drew", Boyd has Johnny call up Jimmy so that Jimmy can accompany them on their interrogation of Nicky Cush. Jimmy is later seen at the bar when Boyd talks to Nick Augustine on the phone.

In "Peace of Mind", Jimmy and Colt argue over what should be handled first: Johnny's betrayal or the search for Ellen May. Later, he is keeping guard at the bar when Raylan and Rachel Brooks arrive. Raylan punches him in the stomach and forces him to call Boyd, but Boyd ends up calling anyway. Raylan and Rachel overhear that Boyd is headed to the church where Ellen May is via speaker phone.

In "Ghosts", Jimmy helps Boyd retrieve a body from the cemetary to swap out with Delroy Baker's to avoid incarceration. While on the way to dispose of the body with Ava Crowder, she makes him get out and he heads back to the bar.

In "A Murder of Crowes", Jimmy is seen with Boyd at their shipment meeting with Detroit.

In "Good Intentions", Jimmy brings Cyrus Boone into Boyd's bar after it is believed he may have tipped someone off about the shipment and hands Duffy over a BB gun that he pulled off Cyrus as well.

In "Shot All to Hell", Jimmy plays along with Boyd's ruse that he is just an ordinary customer while they are talking to Daryl Crowe Jr. and Jean Baptiste. After Boyd reveals himself to the two men, Jimmy holds a shotgun at them.

In "Kill the Messenger", Jimmy is sent by Boyd to go find Gunnar Swift when he gets word that Ava was assaulted by Gunnar's sister, Gretchen. Boyd wants to attack, but Jimmy is wary, given the numbers advantage Jimmy has because of all the skinheads at his residence.

In "Whistle Past the Graveyard", Jimmy is mostly seen accompanying Daryl, Carl, Dewey, Danny and Boyd smuggle the heroin across the Mexican border. Jimmy is shown in this episode to be a fluent Spanish speaker as he negotiates with federales who stopped them at the border. This also comes into use as Jimmy overhears a conversation with two of Corey Flores' men and relays to Boyd that Daryl had contacted Flores days earlier, and had been planning to set them up all along.

In "Wrong Roads", Jimmy and Mike are both held hostage by Roscoe and Jay as they interrupt the meeting between Daryl, Picker, Duffy, and Boyd. Jimmy accompanies Boyd and Elmont Swain as they drive down the road and as Boyd leaves out of the car and claims he has to pee, Jimmy (who is sitting in the backseat) strangles Elmont with a wire, killing him.

In "Weight", he is briefly seen talking to Boyd in his office.

In "The Toll", he is briefly seen with Carl as Boyd wants them to hide the heroin somewhere that God couldn't even find it before his meeting with Duffy, asking Jimmy to take care of Ava in the situation that Boyd is killed.

In "Starvation", he is briefly seen near the end of the episode when Boyd calls him, ordering him to hide the last 6 kilos of heroin in the ceiling and for him and Carl to leave Kentucky as "storms cloud are gathering" and he thinks this one will be epic. As the camera pans back, it's revealed Alberto Ruiz, Manolo and Manuel are holding Jimmy at gunpoint.

In "Restitution", he is seen being held hostage, his hands bound to a chair by duct tape and his mouth taped also as Manolo holds a gun to his head. Ruiz tells Boyd once he enters that Jimmy tried to escape and warn Boyd of their presence when he heard Boyd's keys at the door. Boyd remarks that Jimmy is a good man and Ruiz says "he was", as Manolo fatally shoots Jimmy in the chest. After the shootout, Boyd is distraught over Jimmy's death.