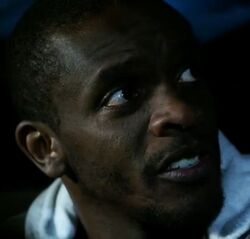 Jody was a criminal wanted by Sharon Edmunds, as he is responsible for the murder of two heroin dealers in Knoxville, Tennessee, and he also skipped bail.

In "Hole in the Wall", Raylan locates Jody attempting to contact his ex-wife, Katrina, at her house in Lexington. Angered when she won't let him see his children, Jody goes to his car and attempts to get his handgun. Raylan shows up, breaking his window and shooting the air bag to subdue him. While under arrest, Jody continuously talks and annoys Raylan, who puts him in the trunk. Raylan's car is stolen at a hardware store by Roz and Benny while Jody is still in the trunk. Raylan finds the three in an office at a scrap yard, where a fourth accomplice, Henry (the scrap yard operator) joins them. Jody pleads for Roz to shoot and kill Raylan. Raylan hits Henry, and Jody holds Roz hostage with the gun to her head. Jody is subdued when Constable Bob Sweeney stabs Roz in the foot, allowing enough distraction time for Raylan to hit Jody with a rim and arrest him.

In "Money Trap", A flashback from six days ago shows Jody being taken away into custody. When the van he is being held in has a flat tire and pulls over on the side of the road, Jody strangles one of the bailsbondman, Mitch, to death when he opens the back of the van to change the tire. Jody's associate, Kenneth, points him in the direction Sharon Edmunds headed, where he fatally shoots her in the side of the neck while taking a bullet in the shoulder. Jody and Kenneth decide to talk to Jackie Nevada, Katrina's sorority sister in order to find out the security code to the safe where Katrina stashed away money. Jody and Kenneth depart when they see Raylan enter the house to question Jackie. Later, Jody breaks into the house while Jackie is away, and holds her at knife-point, demanding the code to the safe. Raylan intervenes with Jackie stepping on Jody's foot to escape, while Jody jumps out of the window, landing on the roof of Kenneth's car. Jody vows revenge against Raylan, deciding to kill him at the High Note Bar because he overheard the conversation between Raylan and Sharon, and has Kenneth record a video, where he sends Raylan an omnious warning. Raylan, realizing Jody is waiting for him in the bar, pulls the fire alarm and has Kent Chilobeck usher the patrons out. Raylan and Jody have a stand off. Jody, attempting to call Raylan's bluff that he won't shoot him, attempts to draw on Raylan. Raylan, in self-defense, guns down Jody, killing him.

Retrieved from "https://justified.fandom.com/wiki/Jody_Adair?oldid=21155"
Community content is available under CC-BY-SA unless otherwise noted.