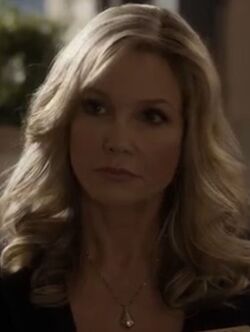 Joyce Kipling is a recurring character in the sixth season of the FX series Justified. She is the bank manager at First River Bank. She is portrayed by co-star Pamela Bowen.

In "Fate's Right Hand", she is first seen helping Boyd posing as a customer in the bank's vault. Boyd's henchman The Pig distracts her to let Boyd spray the vault. Kipling is present later on when Boyd, The Pig, Earl and Carl rob the same bank.

Retrieved from "https://justified.fandom.com/wiki/Joyce_Kipling?oldid=22081"
Community content is available under CC-BY-SA unless otherwise noted.