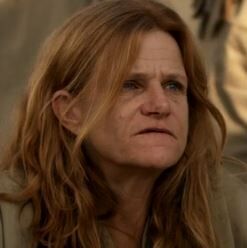 Judith is a recurring character in the fifth season of the FX series Justified. She is the leader of a religious congregation at the Kentucky Women's State Prison who offers Ava Crowder protection in exchange for help smuggling heroin inside to the members of her congregation. In "Weight", she is killed when Ava stabs her to death in self-defense with a shiv while Judith is choking her. She is portrayed by guest star Dale Dickey.

Judith was the leader of a religious congregation inside of the Kentucky State Women's Prison. She would have a plumber smuggle the drugs inside of the prison, where Penny Cole would be forced to have sex with prison guards as part of the deal. In "Weight", Penny reveals that she became pregnant, and Judith would have her receive abortions just to hold up the other half of the smuggling deal. It's because of this that Penny realized that Judith didn't care about her congregation as much as she proclaimed, and the reason she wanted Ava to kill Judith.

In "Raw Deal", Penny Cole arranges a meeting between Judith and Ava. Judith agrees to protect her, but only if Ava helps her smuggle in heroin for the members of her congregation. Ava, however, plants the heroin on the plumber and has him arrested after learning part of the deal is having sex with a guard for silence. Judith is suspicious that Ava planted the drugs to get out of sleeping with a guard, but nonetheless, hears Ava out when she tells her she may have another way of getting heroin inside.

In "Whistle Past the Graveyard", Judith confronts Ava about the shortening window with which to deliver on the drugs, warning her of the dangers of depending on men for salvation. Ava later tells Judith that the drugs are coming, but that she can’t say how just yet, without trusting her at least.

In "Wrong Roads", Judith defends Ava from Lara who is attempting to shank her for ruining the way that they were smuggling heroin inside of the prison.

In "Weight", Ava follows Judith in the bathroom and prepares to kill her, until Penny shows up and informs them about bed checks. Later that night, Ava finds Judith praying alone in the chapel (as told by Penny) and Judith realizes that Ava is trying to have her killed. Ava tells Judith that she doesn't want to work with Rowena and kill Judith, but would rather work a new plan out with Judith. Judith attacks Ava to provoke her, hitting her twice with a steel chair and choking her. In self-defense, Ava grabs the shiv given to her by Penny and stabs Judith to death.

Retrieved from "https://justified.fandom.com/wiki/Judith?oldid=21507"
Community content is available under CC-BY-SA unless otherwise noted.