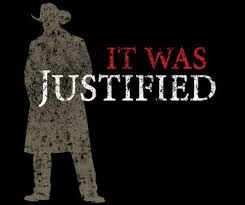 Justified is an American television drama series. It was developed by Graham Yost (Boomtown, Speed) based on the works of crime novelist Elmore Leonard, including Leonard's short story Fire in the Hole and stars Timothy Olyphant (Damages, Deadwood). The series is set in the city of Lexington, Kentucky and the hill country of Eastern Kentucky, specifically in and around Harlan County. Timothy Olyphant stars as the tough, sexy, southern-bred but soft-spoken federal lawman, enforcing his own brand of (at-times extralegal) justice.

Yost wrote the pilot and serves as Executive Producer, Show Runner and Head Writer for the series. Leonard (Cuba Libre, Rum Punch, Get Shorty) is also an Executive Producer on the series along with Fred Golan (Boomtown, Raines), Sarah Timberman (Kidnapped), Carl Beverly (Kidnapped) and Michael Dinner (Karen Sisco), who directed the pilot episode. Justified is produced by Sony Pictures Television and FX Productions. Justified premiered on March 16, 2010, on the FX network.

The working title for the series was Lawman. The first episode was referred to as the "Fire in the Hole pilot" during shooting and retains this as the name of the episode itself.

The pilot was shot in Pittsburgh and suburban Kittanning, Pennsylvania and Washington, Pennsylvania. The subsequent 12 episodes were shot in California. Pittsburgh's David L. Lawrence Convention Center appears on film as the small town "airport" and the construction of the new Consol Energy Center serves as the "new courthouse".

The theme song to the show is "Long Hard Times to Come" performed by the New York City based Gangstagrass, produced by Rench and featuring rapper T.O.N.E-z, Matt Check on banjo, Gerald Menke on resonator guitar, and Jason Cade on fiddle.

The song was nominated for an Emmy for best theme song.

Deputy U.S. Marshal Raylan Givens is a 19th century-style but modern-day officer, who enforces his brand of justice which puts a target on his back with criminals and puts him at odds with his bosses in the U.S. Marshals Service. As a result of his having eagerly shot a Miami fugitive in a "justified" shooting in his South Florida assignment, he gets reassigned to the district covering his rural Eastern Kentucky mining hometown of Harlan County.

Season 2 finds Bo Crowder dead, and the Crowder criminal grip on Harlan County broken. Deputy U.S. Marshal Raylan Givens must now face off against the criminal organizations that are moving to fill the void, and finds himself entangled once again with the mercurial Boyd Crowder.

Season 3 takes place three weeks after the events of the Season 2 finale "Bloody Harlan". Deputy U.S. Marshal Raylan Givens has to face off against two new adversaries: Detroit crime boss Robert Quarles, who looks to come to Kentucky to take over the Dixie Mafia and the Oxycontin business, and Ellstin Limehouse, the omniscent protector of Noble's Holler who will do anything to keep the bloodshed away from his sacred territory. This season also finds Boyd Crowder and his crew also looking to seize the Oxy business and Kentucky for themselves, and pits them in a rivalry against Quarles.

Season 4 takes place two months after the finale of the Season 3 finale "Slaughterhouse". Deputy U.S. Marshal Raylan Givens finds himself in the middle of a dark, 30-year old mystery that involves his father Arlo. Boyd Crowder gains a new ally in Colton Rhodes, a former military policer who jailed him several times in Kuwait, but finds new rivals in Billy St. Cyr, a popular new preacher whose burgeoning congregation is infringing on Boyd's Oxy customer base, and Cassie, Billy's sister who also helps out with his mission. Boyd finds that his quest to reach Harlan high society has its own debts when he quickly becomes embroiled with the deadly Detroit mob.

Season 5 finds Deputy U.S. Marshal Raylan Givens squaring off with the Florida branch of the Crowe family, headed by Daryl Crowe Jr., Dewey's cousin, hoping to make a permanent stay and impact in Kentucky, but Raylan is determined to rid Kentucky of Daryl and his siblings once and for all when they begin to make trouble. Boyd and Wynn Duffy's struggle to gain control of the heroin business leads them to deal with the deadly Mexican cartel, while Boyd must do whatever he can to free Ava from prison.

Season 6 finds Deputy U.S. Marshal Raylan Givens teaming up with Rachel Brooks, Tim Gutterson and David Vasquez in a RICO case to bring down Boyd for good. Meanwhile, Boyd Crowder must revisit his bank robbing days at the behest of Wynn Duffy and Katherine Hale, while a legendary Kentucky gangster named Avery Markham comes back to his home state to win back the love of his life and become the marijuana kingpin of Harlan with a crew of menacing mercenaries.

Retrieved from "https://justified.fandom.com/wiki/Justified?oldid=20371"
Community content is available under CC-BY-SA unless otherwise noted.