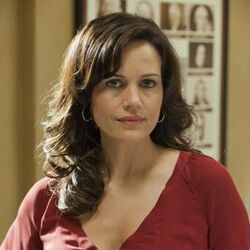 Name
Karen Goodall
Birthplace
Miami, Florida
Birthdate
Unknown
Age
40s
Status
Alive
Cause of Death
Affiliation
Assistant Director of US Marshals Service
Actor
Carla Gugino
Karen Goodall is a character in the third season of the FX series Justified. Goodall was first introduced in the episode “Cut Ties”. Goodall is an Assistant Director who partners with Raylan Givens to investigate the murder of a Deputy US Marshal Bill Nichols. Goodall is Karen Sisco, the title character of a short-lived 2003 TV series created by Elmore Leonard, who also wrote the novella, “Fire in the Hole”, that the source material for Justified is based on. However to avoid trademark infringement, Karen was now married, with the new surname Goodall rather than Sisco. She is portrayed by guest star Carla Gugino, who played Karen Sisco in the eponymous TV series.

Before she was married, Karen Goodall was Karen Sisco—1998 film Out of Sight and 2003 series Karen Sisco—a Deputy Marshal in Miami with Raylan under Dan Grant, whom she calls “the best chief she ever had”. Her father, a former Miami PD Detective, was her mentor and supporter. Goodall is a very tough woman, even being capable of taking down people twice her size, such as a goon of Joe Delahunt’s when he grabs her by the arm while he hits on her. At some point she was married, but the marriage ended two months later. She went on to become the Assistant Director of the United States Marshals Service.

In “Cut Ties”, Goodall helps out on the case that involves Bill Nichols, a US Marshal that has been murdered. However since Rachel, Tim, and Art are going to watch over three of Nichol's WitSec protectees, Goodall and Raylan set out to talk to Joe Delahunt, the former boss of Terry Powe who was ratted out by Powe, causing his boss to be locked up. Raylan and Goodall also begin catching up while driving around on their mission. Goodall and Raylan soon get to Delahunt's place where Goodall knocks on the door, and gets harassed by one of Delahunt's goons, Butch and subdues him after hitting him with a gun that Raylan gave her. At the end of the episode, Goodall watches as Raylan and Winona kiss, possibly implying that Goodall could still have feelings for Raylan. Raylan then walks up to her after checking on Art, and they talk a little. Raylan tells her that it's good to see her again, and Goodall tells him "you too". Goodall then watches as Raylan leaves.

Retrieved from "https://justified.fandom.com/wiki/Karen_Goodall?oldid=21951"
Community content is available under CC-BY-SA unless otherwise noted.