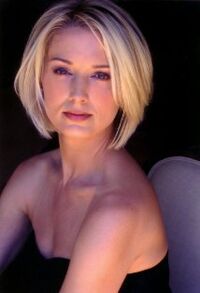 Katherine LaNasa - born December 1, 1966 (1966-12-01) (age 54) in New Orleans, Louisiana, USA - is an actress who guest stars as Caryn Carnes in the FX series Justified first season episode "The Collection". She made her screen acting debut in 1990. She has had recurring roles in Two and a Half Men, Big Love, Judging Amy, Justice and NYPD Blue.

Retrieved from "https://justified.fandom.com/wiki/Katherine_LaNasa?oldid=10608"
Community content is available under CC-BY-SA unless otherwise noted.