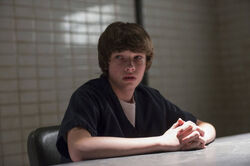 Kendal Crowe is a recurring character in the fifth season of the FX series Justified. Kendal is the son of Wendy Crowe and Jack Anderson and the nephew of Daryl, Dilly and Danny Crowe. He is portrayed by guest star Jacob Lofland.

Kendal is a member of the Crowe family based in Florida. The youngest member of the family, he is frequently looked after by his uncles. Kendal seems to share a closer relationship Daryl out of his uncles, as Daryl acts somewhat like a father figure to him. Kendal's mother, Wendy, became pregnant with him at the age of 22 and Kendal's father, Jack, ditched her out of fear of being a father. For years, Wendy had Kendal believe that Jack was his uncle and she was his sister, although he had been aware of the truth for some time.

In "A Murder of Crowes", he is seen with Danny Crowe as they throw bang snaps at each other.

In "Over the Mountain", he is working the bar at Audrey's when Raylan Givens and Tim Gutterson arrive. Later on, he is detained by Raylan under state mandate for being a minor working in a bar.

In "Shot All to Hell", he is released back into the custody of his sister, Wendy Crowe. At the bar, he witnesses Danny murdering Jean Baptiste and Danny threatens him not to say a word.

In "Kill the Messenger", he backs up Danny's story to Daryl when Danny says that Jean Baptiste got fed up with Danny and went back to Kentucky. Kendal is also shown to be working as a cashier at Mike Jackson's hardware shop when Raylan and Rachel Brooks come in, looking for Mike.

In "Raw Deal", he is left in charge of Audrey's by Daryl as he and Danny head up to Memphis. At the bar, he is seen calling his Uncle Jack, asking if he is staying anywhere near Kentucky.

In "Whistle Past the Graveyard", Jack picks up Kendal and Wendy, taking them out for breakfast where he proposes to Kendal going on a trip to Ohio to ride some rollercoasters, but Jack and Kendal leave while Wendy is in the bathroom. Jack tells Kendal that a man that he accidentally put into a coma while stopping an attempted rape is looking for him after awakening, but Kendal soon calls out Jack on his lies, revealing he is aware that Wendy is his mother and Jack is his father. Jack reveals that he was skimming from a poker game in order to start his own fracking business in Mexico, until a top player caught on and flees when he sees Michael approaching, leaving Kendal by himself. After Michael and Jack are arrested once Wendy and Raylan find them, Raylan gives Kendal the $2,000 he had been planning to use on his trip to Florida, giving Kendal a motivational speech that in a few years, he can make his own way outside of his troubled family, much like he did with his own father. Wendy also acknowledges herself as his mother and apologizes for being a bad one and keeping the truth from him.

In "Wrong Roads", Kendal tells Wendy that he is tired of being in Kentucky, and she promises him that once she receives her cut from Daryl's part in the heroin smuggling, they will be out of Kentucky in a week. Later, Daryl rummages through the sock drawer in one of the back trailers, and finds the envelope of money that Raylan had given to Kendal. Kendal lies and claims to have stolen the money off of john's and that he earned it. Daryl pockets it and refuses to give it to Kendal, causing him to storm off in anger.

In "Weight", Kendal is walking Chelsea, and she is hit by a car after getting away from him to chase a cat. Kendal, out of fear of what Danny will do, hides out at Alison Brander's house. Alison, however, calls Wendy, who picks him up, leaving him angry at Alison for telling on him. At Audrey's, a fight ensues between Kendal and Danny when Danny learns that Chelsea was hit by a car under Kendal's watch, and Kendal reveals to a shocked Daryl that Danny murdered Jean Baptiste. In a back trailer, Daryl creates a "blood bond" between him and Kendal by cutting their palms and touching hands.

In "The Toll", Kendal and Daryl show up at the Marshal's office, where Daryl surrenders himself. Kendal confesses to shooting Art Mullen in the Marshal's office. Kendal claims that he drove to talk to Alison, having Danny's gun in his possession for protection as Danny gave him the gun to protect himself because Danny wouldn't always be around and that when the door opened, he saw a man with a star on his belt and believing him to be the man that killed Danny and that he was after Kendal, Kendal shot him in order to protect himself and his mother. After his "confession", Kendal is going to be sent to juvy, although Raylan doesn't buy the story and believes that Daryl had Kendal take the fall for him as he was the real shooter and didn't realize he shot a US Marshal until the story was on the news.

In "Restitution", Kendal is seen in a holding cell while Raylan talks to him, revealing that he is going to be tried as an adult, hoping to have Kendal come clean about Daryl shooting Art, although Kendal still sticks to his story about shooting Art himself. It is likely that he was released following Daryl's taped confession of being the shooter, as David Vasquez tells Rachel Brooks, Raylan and Tim Gutterson that Wendy plans to take Kendal back to Florida.

Retrieved from "https://justified.fandom.com/wiki/Kendal_Crowe?oldid=18375"
Community content is available under CC-BY-SA unless otherwise noted.