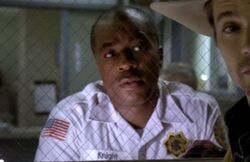 Knight, played by Jeorge Bennett Watson, is a character in the FX series Justified. Knight works as a Detention Deputy at the Lexington Federal Detention Centre in Kentucky and frequently oversees prisoner transfers to the custody of the US Marshals service.

Knight works as a Detention Deputy at the Lexington Federal Detention Centre in Kentucky.

In "Riverbrook", Knight oversees the prisoner transfer of Dewey Crowe into the custody of Deputy US Marshal Raylan Givens. He does the same for Douglas Cooper a week later.

In "The Gunfighter", Knight observes Boyd Crowder as he is visited by Ava Crowder.