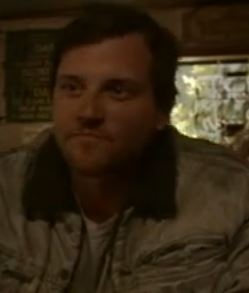 Kyle Easterly was a recurring character in the second season of the FX series Justified. Easterly was a miner working at Black Pike Mining, who recruited Boyd Crowder on a heist mission to steal money from the company, but was killed in an explosion caused by Boyd when he found out that he was to die as well. He is portrayed by guest star Michael Mosley.

Not much is known about Kyle's past, except that he has admitted to being a murderer during his conversation with Boyd.

In "The I of the Storm", Kyle first appears and shoos away Pruitt, when he is insulting Boyd for being an ex-con and murderer working at Black Pike. Kyle asks him where he can find a drink in a dry town and invites Boyd to drink with him, but Boyd says he would rather drink alone. Nevertheless, Kyle finds Boyd at the bar and reveals that he is well aware who Boyd is and of his criminal past. He admires Boyd, saying that they are alike because they are both murderers who lost friends in the woods. Boyd leaves with Kyle following behind, and when he ignites his truck to depart, Kyle attempts to reach inside and turn it back off so that he can talk to Boyd about his offer. Boyd puts Kyle in a headlock and drives the car, dragging Kyle several feet down the road before throwing him back out in an attempt to kill him. Kyle, although injured, survives.

In "For Blood or Money", Kyle shows up at Ava's house. Boyd apologizes for what he did to Kyle the other day, but Kyle says that it is alright and that isn't what he came for. Later that night at Black Pike, Boyd rejects Kyle's offer as he is no longer in criminal work. Kyle is persuasive, talking of armored cars and pulling off a heist without getting caught. "What if there's a way you not only not get caught, but get treated like a hero like one of those miners down in Chile," he says. Boyd appears intrigued by the offer.

In "Cottonmouth", Kyle lays out the heist plan to Boyd: Boyd will take packets down to the splinter shaft, Kyle, Marcus, and Pruitt will transfer the cash to the truck, and Boyd will kill Shelby Parlow, the security agent and they will frame him for the robbery, being viewed as heroes for stopping the heist. Boyd calls Ava's house from his cell phone, and pretends to talk to Ava, and overhears Kyle and Marcus saying that Boyd is to die as well in the mine explosion, along with Shelby.  Boyd, Kyle and cronies are readying for their big heist. Boyd pulls the gang aside and demands their cell phones, explaining that he is about to set an explosive charge and can't risk someone's phone interfering with the signal. They rob the money and Kyle sets off the detonator once Shelby and Boyd are in the mine, but the truck explodes instead. Unbeknowst to Kyle, Boyd was well aware of the plan to kill him and set the explosives in the truck outside. Kyle and Pruitt are immediately killed in the explosion.

Retrieved from "https://justified.fandom.com/wiki/Kyle_Easterly?oldid=20871"
Community content is available under CC-BY-SA unless otherwise noted.