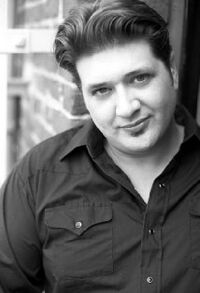 Lance Barber is an American actor who guest stars as Frank in the FX series Justified first season episode "Long in the Tooth". He has also had recurring roles in the series The Comeback, Californication, On the Spot and It's Always Sunny in Philadelphia.

In 2006 he had roles in the series Thick and Thin, as a different character in The Gilmore Girls and in an untitled Patricia Heaton pilot which was not picked up. He also appeared in the short film Breakdown and the films For Your Consideration and The Lather Effect. In 2007 he had roles in the pilot for Insatiable, three episodes of Californication and the television feature The Hill. In 2008 he appeared in the films Leatherheads and Shades of Ray and the series The Middleman and The Mentalist. In 2009 he had roles in the series Men of a Certain Age, CSI: Miami and Monk and the television feature Single White Millionaire.

In 2010 he guest starred as Frank in the FX series Justified first season episode "Long in the Tooth". He also had roles in the series The United States of Tara, It's Always Sunny in Philadelphia and Grey's Anatomy and the short films Dead Cat and Penny.

In 2011 he appeared in the series The Big Bang Theory and Harry's Law.