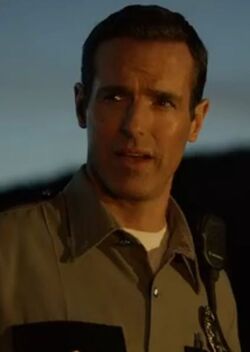 Lapiccola is a recurring character in the sixth season of the FX series Justified. He is a police officer who apprehends Raylan Givens after David Vasquez places a BOLO on him. He is portrayed by guest star Jeffrey Pierce.

In "Collateral", Lapiccola is seen along with partner holding their guns on Raylan shortly after he takes a wounded Bob Sweeney to the hospital.

In "The Promise", Lapiccola drives Raylan to the police station per request of the BOLO issued by Vasquez. Raylan learns that the KSP Officers are in possession of Dewey's alligator necklace and continues to talk to Lapiccola, who seems to channel Raylan by threatening to put him in the trunk if he doesn't stop talking. Art Mullen manages to get Raylan back into his custody after talking with the head of the police station.

Retrieved from "https://justified.fandom.com/wiki/Lapiccola?oldid=21799"
Community content is available under CC-BY-SA unless otherwise noted.