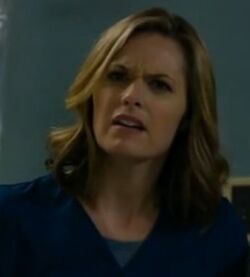 Layla was a supporting character in the FX series Justified third season episode, "Thick as Mud". Layla is a nurse who works at Tyree Medical where she watches over Ash Murphy. Layla soon causes Ash to suffer from a post-surgery stroke after injecting an air bubble into his brain after he gives Raylan Givens information on Lance, which kills him. Lance is revealed to be her boyfriend, who she also accompanies with organ harvesting. Layla is shot in the chest by Raylan after she attempts to shoot and kill him while he is groggy in a bathtub. Layla is portrayed by guest star Maggie Lawson.

Layla is a nurse who worked at Tyree Medical. Layla also worked at a transplant center, having her first shift when Ash was admitted to the hospital. At some point in she got together with her boyfriend Lance to steal the organs of cadavers at the prison and sell them on the black market. Lance would find the bodies and cut them open using his job as a cover, and Layla would set up the contacts through the hospital transplant wing where she works.

In "Thick as Mud", she appears when Raylan visits Ash Murphy. Layla chastises Raylan for mistreating Ash due to the fact he is her patient. Raylan counters by saying that Ash is his prisoner, and Raylan begins to run a scenario by her about removed kidneys. Layla begins to tell him about Dr. Boisineau, an arrogant transplant surgeon who frequently hits on his nurses who might just have answers for Raylan. Raylan later revisits the hospital after learning about Ash's stroke, and the receptionist there has no idea who Layla is. Raylan visits her at her house, and reveals to her that he didn't know she was from a transplant hospital nearby, and that she had her first shift as a nurse whenever Ash was admitted, and suspects her of being behind his murder. Layla indirectly admits to inserting an air bubble into Ash's brain, but she attempts to flirt with Raylan to talk him out of arresting her. Lance and her soon end up in an argument after he injects Raylan in the shoulder with a substance, leaving him unconscious. Layla reluctantly agrees to allow Lance to harvest Raylan's kidneys, but while she is gone to get another syringe, she takes Raylan's gun from the counter. Layla goes into the bathroom telling Lance to look at her, and she shoots him in the chest as he turns around. Lance falls on top of Raylan, who is slowly regaining consciousness in the bathtub. Layla then attempts to kill Raylan, but Raylan (through Lance's stomach), manages to shoot Layla in the lower chest. Layla, in shock, tells Raylan she can't believe he shot her before she collapses to the ground. Raylan asks Art if Layla survived the shooting, to which Art replies: "jury's still out.

In Guy Walks Into a Bar, Judge Reardon and Raylan discusses the impending release of Dickie Bennett. The subject of talking to any of his kidnappers comes up, and Reardon says: "No, wait, we can't. You killed them," implying none of them survived.

Retrieved from "https://justified.fandom.com/wiki/Layla?oldid=22004"
Community content is available under CC-BY-SA unless otherwise noted.