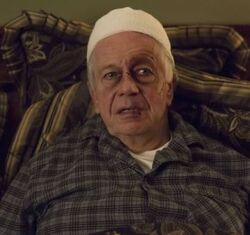 Lee Paxton was a recurring character in the FX series Justified. Lee Paxton is one of the Clover Hillers, a rich group of businessmen, that attend Tillman Napier's swinger party. In the season finale, "Ghosts", Paxton conspires with Harlan County Deputy Nick Mooney to set up Boyd to be arrested for the murder of Delroy Baker, although it backfires and Ava is arrested instead. In "Shot All to Hell", he is shot through the head by Boyd Crowder. He is portrayed by guest star Sam Anderson.

Not much is known about Lee's background.

In "Money Trap", Boyd Crowder bonds with both Lee and Gerald Johns, hoping to see if one of the two men is Drew Thompson. Lee, Gerald, Keener, and Arnold organize a meeting with Boyd. It turns out that Gerald and Lee were responsible for Bo's success, as well as Boyd's inheritance, and they want Boyd to kill Frank Browning, the owner of Black Pike Mining when he won't bust open a slurry pond for their cause to get even richer off the federal government's environmental emergency funds. The men offer Boyd an ultimatum: Either kill Frank Browning or they will destroy Boyd.

In "Outlaw", Lee, Gerald, and Arnold visit Boyd at the bar. Boyd informs the men that he did not kill Frank himself. Boyd informs them that someone has killed Sam Keener, and that the Police believe it is the same person who killed Frank Browning. Lee and the rest of the Clover Hillers learn that Boyd had a higher power strip the Clover Hillers of all their law contacts, removing their power. Boyd wants $100,000 from each of the men, as well as a Dairy Queen franchise.

In "The Hatchet Tour", Lee and Gerald are seen making fun of Bob Sweeney when he arrives at the door of their cabin to question them. Lee, Gerald, and Bob then have a shootout with Bob pulling out an automatic gun and opening fire on the cabin. Raylan shows up and resolves the issue, ordering the three men to all drop their weapons. Raylan then questions Lee and Gerald to see if they initiated the hit on Arlo Givens, which both men deny.

In "Ghosts", he is called down to Johnny's bar by Boyd, as it turns out he owns the funeral home which houses Delroy Baker's body. Lee suggests swapping Delroy's body with another corpse from the cemetary. When Ava Crowder is arrested while attempting to dispose of Delroy's body, it turns out that Lee and Nick Mooney were a part of the set-up (although the two were hoping to have Boyd be incarcerated and not Ava).

In "A Murder of Crowes", Boyd pays an unannounced late-night visit to Lee, hoping to use him to curry favor with his friend Judge Bishop who's sitting on Ava's case. When the meeting doesn't go well and the funeral director becomes aggressively insulting toward Ava, Boyd, in a fit of rage, clubs Paxton almost to death with his pistol.

In "The Kids Aren't All Right", it's revealed that Lee has been left comatose after the assault by Boyd. Near the end of the episode, Lee wakes up from the coma, asking for his wife, Mara.

In "Over the Mountain", Nick brings a severed hand to Lee, proclaiming it to be Boyd's by showing him a tattoo on one of the fingers (unbeknownst to Lee, this isn't really Boyd's hand). Although Lee is satisfied with Boyd's "death", he tells Mara that he is still going to pursue the case against Ava.

In "Shot All to Hell", Nick calls Lee in the middle of the night, telling him about an anonymous tip called in regarding bodies being stashed at one of Lee's funeral homes and that the would be the bodies there because Lee made a deal with a local criminal element. Lee realizes that Nick didn't kill Boyd, and turns on his lamp to see Boyd sitting in a chair across from him. Boyd tells him that the supposed deal will tarnish Lee's reputation in Harlan, and shoots Lee in the head, staging it as a suicide.


Retrieved from "https://justified.fandom.com/wiki/Lee_Paxton?oldid=21156"
Community content is available under CC-BY-SA unless otherwise noted.