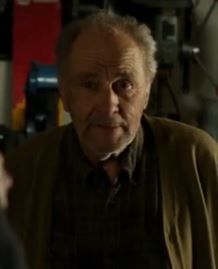 Lemuel Becket was a recurring character in the first and third season of the FX series Justified. Becket was an arms dealer who specializes in Chinese made firearms, and sells Boyd Crowder a rocket launcher, which he uses to blow up a track full of meth meant for his father, Bo. In "Loose Ends", he's revealed to have sold Tanner Dodd the explosives used to bomb Tillman Napier's car in order for Tillman and Nick Mooney to frame Boyd. He is shot and killed by Errol Butler in the same episode, because Errol is trying to cover Limehouse's tracks. Becket is portrayed by guest star Jim Haynie.

Becket is an arms dealer and explosives expert.

In "Veterans", Boyd Crowder visits him and is interested in buying military-grade weapons from him with the protection money that Boyd's father, Bo Crowder, gave him as a bribe. After accepting the money, Lemuel tells him he will see what he can do for him. At the end of the episode, we see that Boyd has bought a rocket launcher from him, that he later uses to blow up Bo's truck full of his supply of meth.

In "Loose Ends", Tanner Dodd and Errol visit him at his shop and Dodd demands a refund since he had previously bought explosives from the man. Becket leads the two inside, and tells Dodd to get the bag of money which is above a safe. However, Dodd accidentally steps on a land mine located up under a step-ladder to which Becket activates. Becket tells him to slowly drop his weapon because if he drops it too fast, the mine will be set off, but any sudden change in weight will activate it. If they kill Becket, then Dodd will be stuck on the step-ladder since Becket is the only one that can deactivate it. Becket successfully manages to persuade Dodd to drop his weapon, but he is shot and killed by Errol who wants to cover Limehouse's tracks.