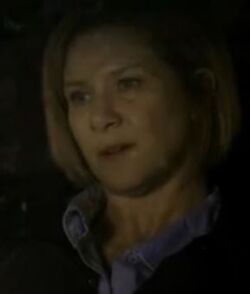 Leslie Mullen is a recurring character in the fifth season of the FX series Justified. She is the wife of Chief Deputy Art Mullen, as first mentioned in the Season 4 episode, "Where's Waldo?" during a conversation between Art and Patrick Massett (a US Marshal interested in succeeding Art as Chief Deputy once he retires). She is portrayed by guest star Leslie Riley (real-life wife to Nick Searcy, who plays Art)

In "The Toll", she is seen with Raylan in his car, discussing Winona Hawkins before she quickly changes the subject, asking Raylan why he wasn't there with Art whenever he was shot. At the hospital, she is debriefed by a doctor on the situation with Art.

In "Restitution", she is seen by Art's side at the hospital when Rachel Brooks, Tim Gutterson and Raylan go to visit him.

Retrieved from "https://justified.fandom.com/wiki/Leslie_Mullen?oldid=22067"
Community content is available under CC-BY-SA unless otherwise noted.