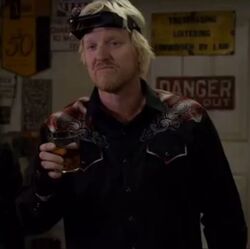 Name
Lewis Mago
Birthplace
Birthdate
Age
Status
Deceased
Cause of Death
Accidentally blew himself up in an explosion
Affiliation
Wynn Duffy
Actor
Jake Busey
Lewis "The Wiz" Mago is a guest character in the FX series Justified sixth season episode "The Trash and the Snake". Lewis is a crackpot safecracker hired by Wynn Duffy and Boyd Crowder to help figure out how to break inside of the vault located at The Portal. Mago is killed in an explosion, however, after forgetting to remove his own cell phone while attempting to detonate a vault similar to the one found at The Portal. He is portrayed by guest star Jake Busey.

Retrieved from "https://justified.fandom.com/wiki/Lewis_Mago?oldid=21419"
Community content is available under CC-BY-SA unless otherwise noted.