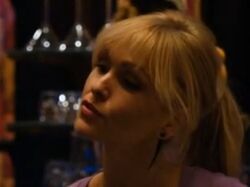 Lindsey Salazar is a recurring character in the third and fourth seasons of the FX series Justified. Lindsey is the barmaid at The High Note Bar, located under the motel room where Raylan Givens currently resides. Lindsey becomes Raylan's love interest during her appearances in the two seasons, until she robs him of his cash that he received from his task apprehending Jody Adair for bailbondswoman Sharon Edmunds, using the money to conspire with her ex-husband, Randall Kusik to buy game cocks. Lindsey soon turns on Randall, leaving him behind as she departs for good with Raylan's money. Lindsey is portrayed by guest star Jenn Lyon.

Lindsey Salazar is the ex-wife of Randall Kusik. While the two were together, they had a scam where Lindsey would get close to a man, find out what things of value he had to steal, and then Randall would steal the merchandise. Randall, however, was jealous of the attention Lindsey was receiving from the men and almost beat one man to death, causing him to get sent to prison.

In  "The Man Behind The Curtain", she formally introduces herself to Raylan after he is woken up by the loud music playing in the bar, and she gives him his first drink free.

In "Guy Walks Into a Bar", Raylan confides in her to help him out with his testimony against Dickie Bennett. Later, she orders Robert Quarles and Wynn Duffy out of her bar at gunpoint as Quarles and Raylan are about to have a draw. She and Raylan then proceed to have sex afterwards in Raylan's upstairs bedroom.

In "Hole in the Wall", Raylan finds her in his motel room, and has a romantic encounter with her before hiding his stash of money in his drawer.

In "Where's Waldo?", Raylan and Lindsey are seen making love in Raylan's bed. She wants to go leave to sign for the beer delivers, but Raylan tells her to stay in bed while he takes care of it for her. Later on that night, her and Raylan are seen kissing when the same burly man (Randall) Raylan encountered that morning comes back in. Raylan says that they are definitely closed, and the man says that he is only there to speak to Lindsey, his wife.  This revelation leaves Raylan in shock.

In "Truth and Consequences", Raylan and Lindsey discuss the arrival of Randall. Lindsey confides in Raylan that while her and Randall were married, they developed a scam where Lindsey would get close to a male, find out what he has valuable enough to steal, and that Randall would make his move and pocket the merchandise. However, Randall got too jealous of the attention Lindsey got, causing him to almost beat a man to death and get sent to prison. She reassured Raylan that she has reformed, and they continue making love. Later on that night, Raylan finds Lindsey missing and his room trashed, with his money also gone from the Jody Adair task.

In "This Bird Has Flown", Randall and Lindsey visit Joe, and hand him the money stolen from Raylan to pay for Randall's cock-fighting management. As they drive off, Lindsey flirts with a gas station clerk, Alvin, while Randall is busy stealing beers. Randall, however, gets jealous later and drives back to the station, pummeling Alvin. Lindsey attempts to alert Raylan, but hangs up when she sees Randall come back out. While the two are parked out by a farm, Raylan comes up armed with a shotgun full of bean bag rounds. He shoots Randall in the stomach, sending him to the ground. While Raylan talks with Lindsey, Randall tackles him to the ground and a scuffle ensues. Raylan gets the upper hand, but is shot by Lindsey. She then shoots Randall three times before knocking him out by the butt of the shotgun. Lindsey tells Raylan that his money is in the back of the van, but Raylan finds only chickens instead.

Afterwards, Raylan tells Rachel he's not going to pursue her.

I think you were going to apologize again for not giving me a full accounting of every second of your life before you heartlessly accepted the gift of my feminine virtue.