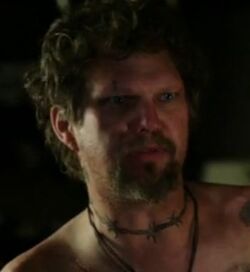 Longbaugh was a supporting character in the FX series Justified Season 3 episode "Measures". Longbaugh was a drug dealer under the protection of Boyd Crowder. Longbaugh, along with his partner Parker, are killed by Robert Quarles (who poses as an interested buyer) in retaliation for Boyd intervening in Quarles's affairs by making Tillman Napier ineligible for re-election. Longbaugh was portrayed by guest star Clay Wilcox.

Longbaugh is a drug dealer who had been receiving protection from Boyd Crowder. After receiving a tip from Sheriff Tillman Napier, Quarles poses as a buyer and visits Longbaugh and Parker to rob them.

In "Measures", Quarles shows up posing as an interested buyer. Longbaugh, suspecting the man is a police officer, subtly holds a katana up to his neck in order to scare him. Quarles then begins to ask if the two men worry about leaving their drugs in the open. Longbaugh tells him that the cops come in to search, and no matter where they put drugs, they will find them. Quarles says that where he is from, dealers rip each other off all the time. Parker says that nobody ever steals from them, and Longbaugh quickly becomes annoyed with Quarles's questions and tells him that it's time to do his business and leave. Quarles distracts Longbaugh by asking him how to get the rust stain off his katana, and shoots Parker in the head. Longbaugh jumps onto him, but Quarles strikes him several times in the throat with the sheath of the katana and breaks his windpipe. Stunned, Longbaugh is then finished off with the katana sheath.