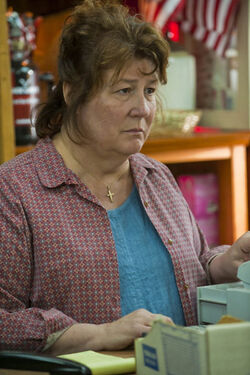 Maggie "Mags" Bennett was a recurring character and main antagonist in the second season of the FX series Justified. Mags was the matriarch of the Bennett family, a group of hillbilly pot growers, who are in a generations long feud with the Givens family. Mags poisons Loretta McCready's father Walt and takes in Loretta, telling her she sent her father to do some work in Texas. After the events of Brother's Keeper Mags appears more distraught about losing Loretta than about the death of her son Coover. In the season 2 finale Bloody Harlan Mags is shot in the leg by a vengeful Loretta. Mags dies at the end of the episode when she commits suicide by drinking from her own glass of poisoned "apple pie" moonshine, the same method she used to kill Walt. Mags was portrayed by guest star, character actress Margo Martindale.

The Bennetts and the Givenses have been rivals for generations. She makes a mean "apple pie" moonshine flavored to be similar to apple pie. Mags intended to just be a wife and mother until she was forced to take over her husband's criminal enterprise after his death. She runs a general store as a front for her family's lucrative marijuana growing business. She and Helen have placed a hold on the Givens-Bennett feud. She entrusts her money to Ellstin Limehouse.

Mags poisons Walt McCready with a glass of Apple Pie moonshine because he got the authorities involved when a man in the Bennett's employ perved on his daughter Loretta. She has Dickie and Coover dispose of the body down a mine shaft. Mags takes in Loretta and tells her her father Walt is doing some work for them in Texas. She was once a respected member of the community until she sold the land she had sworn to protect to a mining company, Black Pike. Afterwards she is reviled by the members of town and had her local general store vandalized and burglarized.

After Loretta finds out about the Bennetts' involvement in her father's murder, she is sent to foster care. Mags still asked Raylan Givens about her welfare.