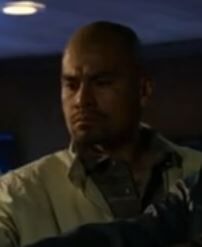 Manolo is a recurring character in the fifth season of the FX series Justified. He was a henchman working for Alberto Ruiz and Yoon. He is portrayed by co-star Daniel Moncada.

In "Starvation", he is first seen (along with Manuel) when Alberto meets with Wynn Duffy in the motorcoach. Near the end of the episode, the three of them are holding Jimmy Tolan at gunpoint while he is on the phone with Boyd Crowder, as his boss Alberto, knows that Boyd is still alive after catching a glimpse of him at the old barn in Loyal where they were to catch Daryl Crowe Jr. and get the heroin.

In "Restitution", Boyd goes into his office at the bar to find Alberto, Manolo and a bound Jimmy in the back room. He pulls out his gun on Alberto and prepares to shoot him, until Manuel shows up behind him, holding a gun to his head. Manolo then shoots Jimmy in the chest, killing him and Alberto reveals that because Boyd lied on his promise of there being no bodies in Mexico, they plan to kill the men responsible and give Boyd a time limit to catch Daryl. They ultimately go to Ava's old house to meet with Daryl, and US Marshals Rachel Brooks and Tim Gutterson show up as Boyd had edited Raylan's number to read Daryl and pretended to text him. A shootout ensues and Manolo runs into the house after Ruiz and Manuel are killed and fires his gun at the couch where Boyd had been previously sitting, but is shot in the back and killed by Boyd, who was behind him holding Manuel's gun.

Retrieved from "https://justified.fandom.com/wiki/Manolo?oldid=21363"
Community content is available under CC-BY-SA unless otherwise noted.