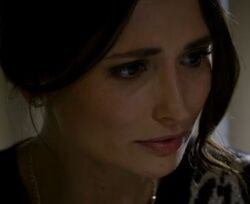 Mara Paxton is a recurring character in the fifth season of the FX series Justified. Mara is the widow of Clover Hiller Lee Paxton, who quickly becomes acquainted with career criminal Boyd Crowder. Mara is portrayed by guest star Karolina Wydra.

In "A Murder of Crowes", she is seen at the end witnessing Boyd beating Lee with his pistol after Lee insults Ava Crowder. Boyd offers to pay her off.

In "The Kids Aren't All Right", Harlan Sheriff Nick Mooney visits her in the hospital, where she confirms Boyd as the attacker when Mooney gives a physical description of Boyd. However, at the bar, Mara recants her statement in front of the entire bar, Boyd, and all of Mooney's men. Later that night, Mooney pulls her over on the side of the road and threatens her to think long and hard and to positively identify Boyd next time.

In "Good Intentions", Nick visits Lee at the hospital with Mara, saying that she denied Boyd's responsibility in Lee's attack in front of all his men. Lee, sides with Mara, saying that she was obviously terrified and tells Nick that he doesn't want Boyd arrested, but wants Nick to be the one to kill him. Mara calls Boyd and tips him off about Lee and his request to Nick. Mara and Boyd set up Nick in a trap, where Boyd offers to give him the money he was originally going to give Lee if Nick tells Lee that he did as he asked and killed Boyd. Mara suggests possibly duplicating Boyd's tattoos on a corpse to keep up their story of Boyd's death to Lee.

In "Over the Mountain", Mara is present when Mooney brings Lee the severed hand which is supposed to be Boyd's. After Mooney leaves, Mara asks Lee if he is still going to pursue the case against Ava now that Boyd is dead.

In "Shot All to Hell", Mara is present at the diner with Boyd when Mooney meets them, requesting Boyd pay him with the money he was promised. Mara witness Mooney's murder at the hands of Hayes Workman. Boyd tells her that Hayes is receiving the money since he is dying from black lung and it will be his inheritance for his kids and family. Boyd tells Mara to leave Harlan and never come back.

Retrieved from "https://justified.fandom.com/wiki/Mara_Paxton?oldid=17647"
Community content is available under CC-BY-SA unless otherwise noted.