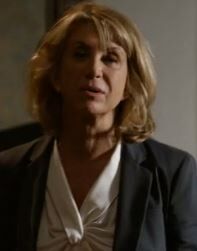 Marsha Keyhoe is a recurring character in the fifth season of the FX series Justified. Keyhoe is Dewey Crowe's attorney who represents him in his case against the US Marshals and later represents Daryl Crowe Jr. when David Vasquez is trying to prosecute him. She is portrayed by guest star Jeannetta Arnette.

In "A Murder of Crowes", Marsha helps represent Dewey in his case involving his mistreatment and abuse at the hands of the US Marshals, particularly Raylan Givens. Marsha helps Dewey win the case, earning him $300,000.

In "Starvation", Marsha represents Daryl at the Marshal's office when David Vasquez is trying to prosecute him.

Retrieved from "https://justified.fandom.com/wiki/Marsha_Keyhoe?oldid=17811"
Community content is available under CC-BY-SA unless otherwise noted.