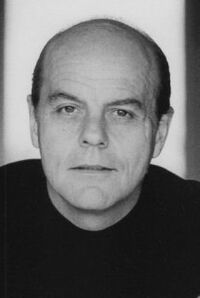 Ironside was born Frederick Reginald Ironside in Toronto, Ontario, the son of Robert Walter Ironside and Patricia June Passmore. His father was a street lighting technician, and his mother a homemaker.

Ironside attended the Ontario College of Art in Toronto and wrote a play at the age of 15, The Shelter, which won the first prize in a university contest. He also won the Senior writing award for Riverdale Collegiate Institute in 1967.

In a January 2010 interview, Ironside stated in response to a question about his many roles in science fiction movies that he has always been a big fan of science fiction and often received science fiction short story collections from his grandfather that he kept in a shoebox under his bed. He stated that his favourite science fiction novels are Dune by Frank Herbert and "anything involving adventure."

One of Ironside's first roles was a memorable turn as evil telepath Darryl Revok in Scanners, an early film by David Cronenberg. He appeared as "Miler Crane" in The A-Team episode "Taxicab Wars". His breakthrough role was as cynical anti-hero Ham Tyler in the television miniseries V: The Final Battle. He is also known for his roles in Top Gun as Naval Aviator Lieutenant Commander Rick 'Jester' Heatherly, Extreme Prejudice as Major Paul Hackett, and Total Recall as Richter (the murderous henchman of Ronny Cox's villain Cohaagen). Ironside played the villainous General Katana in the science fiction sequel Highlander II: The Quickening and, after a brief stint in ER's inaugural season, he was tapped to replace Roy Scheider as captain of the high-tech submarine seaQuest in the third season of seaQuest DSV as Captain Oliver Hudson. However, NBC cancelled the series after only thirteen episodes with Ironside as the star. In 1992, he starred as M. Emmet Walsh's brother in David Winning's thriller Killer Image. In 1997, Ironside was reunited with Total Recall director Paul Verhoeven for Starship Troopers. He also appeared in The Perfect Storm and The Machinist. He also starred in the movie Chaindance as a small time crook, unable to make it on the outside, who was paired up with a handicapped man. Ironside recently starred as Resistance General Ashdown in Terminator Salvation, reunited with his co-star Christian Bale from The Machinist.

Ironside has also been recognized for his voice acting. He played iconic comic book villain Darkseid in Superman: The Animated Series and its sequel, Justice League to great accolade. In one episode of The New Batman Adventures, he played Batman in a Batman: The Dark Knight Returns sequence. He also played another role in the DC Comics universe; Lois Lane's father, General Sam Lane in three episodes of Smallville.

He has also worked in video games as the voice-talents of Tom Clancy's character Sam Fisher in the Splinter Cell games and is cast as the Global Defense Initiative's Lieutenant General Jack Granger in Command & Conquer 3: Tiberium Wars. Ironside signed a 5-year deal to portray Captain Jonas Trager in the SpaceWorks Television science fiction series, Ice Planet but the show was not produced.

In 2009, he starred in The Beacon under the direction of Michael Stokes.

In 2010, Ironside guest starred in Season 4, Episode 1 ("Friends and Enemies") of Burn Notice.

In 2011, Ironside appeared in the film: X-Men: First Class, playing the Captain of the 7th fleet.

Retrieved from "https://justified.fandom.com/wiki/Michael_Ironside?oldid=15075"
Community content is available under CC-BY-SA unless otherwise noted.