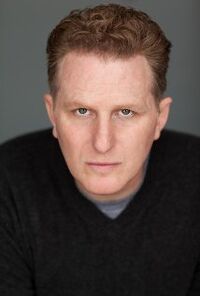 Rapaport was born in Manhattan, New York City, the son of June Brody, a New York radio personality, and David Rapaport, a radio program manager. As a teenager he idolized actors, and fellow New Yorkers, Robert De Niro and Christopher Walken. He was expelled from high school and moved to Los Angeles, California to try stand-up comedy.

Rapaport has appeared in both dramatic and comedic roles on film and television. His movie roles include starring alongside Eddie Murphy in Metro, as a wisecracking marine biologist in Deep Blue Sea, and as a naive college student whose loneliness drives him to become a racist skinhead in Higher Learning. Many credit his breakout role with the independent film Zebrahead. His other best known film role was in True Romance as Dick Ritchie. Rapaport costarred in the Fox sitcom The War at Home, in which he played an "average Joe" type dealing with the everyday challenges of family life. The sitcom debuted in September 2005, and was cancelled in May 2007.

He had a recurring role in My Name is Earl as Frank, a convict Earl reunites with in prison. His character was the reason for many of the things in Earl's life, such as indirectly giving Earl his trailer and El Camino after a botched robbery with his partner, Paco. He played one of the main characters in the season 4 of Prison Break as Homeland Security Agent Don Self.

In October 2008, Rapaport announced that he was directing a documentary about legendary hip hop act, A Tribe Called Quest. The film Beats, Rhymes & Life: The Travels of a Tribe Called Quest was released in 2011 and received mostly positive reviews.

On November 10, 2008, TV Guide reported that Rapaport is developing a series based on the work of social workers for CBS.

Rapaport also provides the voice of "Squirt" on The Hub's Pound Puppies series, which premiered on October 10, 2010.

Rapaport is married to Nichole Beattie and they have two children, sons Julian Ali and Maceo Shane. His son was named after Vincent Mason (nicknamed "Maseo") of the rap group De La Soul.

He was in the New York tabloids in mid-2005 as the landlord who evicted actress Natasha Lyonne from her apartment (in one of the residential buildings he owns), which he described as, among other things, "filthy". Rapaport wrote an account of the matter in May 2005's issue of Jane Magazine.

Rapaport has made an appearance in the music video for hardcore punk band H2O's song 'What Happened' and is close friends with lead singer Toby Morse.

Rapaport made an appearance on the June 7, 2008 edition of "The Dirt Sheet" on WWE.com, giving his support to the hosts, John Morrison and The Miz, saying such comments as "they are my favorite hosts" and "they are awesome".

On February 12, 2010, Rapaport participated in the NBA All-Star Weekend's Celebrity Game and won the MVP for the game for his defense on football player Terrell Owens, the MVP of the last two Celebrity Games, despite scoring just 4 points and having 1 rebound.

Retrieved from "https://justified.fandom.com/wiki/Michael_Rapaport?oldid=18085"
Community content is available under CC-BY-SA unless otherwise noted.