Edit
watch 01:36
We're Getting Mutants in the MCU - The Loop
Do you like this video?
Play Sound
Mike Cosmatopolis 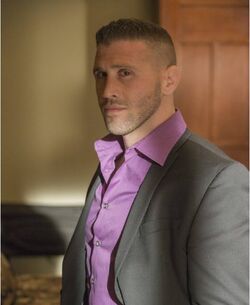 Mike "Mikey" Cosmatopolis, played by guest star Jonathan Kowalsky, was a professional bodyguard working for Dixie Mafia middleman Wynn Duffy. Affectionally referred to as "Mikey" by his employer, he remained fiercly loyal to Duffy even after a falling out when Duffy becomes a CI for the Marshals and revealed he was responsible for snitching on Katherine Hale's late husband Grady. In "Fugitive Number One", Mike dies after taking five bullets during a struggle with Katherine when he has a change of heart after ratting Duffy out to Katherine about Duffy's role in Grady's death.

Mike is hired by Duffy following being shot by Emmitt Arnett's bodyguard in the previous season. He is seen in "Save My Love", frisking Gary Hawkins whenever he comes to visit Duffy and order a hit on Raylan Givens.

In "Full Commitment", he is seen when Raylan (along with Gary and Duffy's hitman) come to the motorcoach.

Mike is present when Deputy US Marshals Raylan Givens and Tim Gutterson question Wynn Duffy about Fletcher Nix in "The Gunfighter". Mike is at the trailer when Duffy meets with Robert Quarles in "Harlan Roulette". When Raylan arrives to question Duffy about an attempt on his life he hauls Mike out of the trailer and shuts him outside. He then assaults Duffy and threatens to kill him before leaving.

In "Get Drew", he hands the phone to Duffy in the middle of the night when Johnny Crowder calls. Later, he objects to the idea of fleeing Kentucky when Duffy suggests it because of their failure to retrieve Drew Thompson before the Marshals.

In "A Murder of Crowes", Mike hands Duffy the phone when Boyd calls in the middle of the night about heading to Detroit when he is ripped off during a drug shipment. Mike also accompanies Duffy, Boyd and Jimmy to Detroit.

In "The Kids Aren't All Right", Mike is present at the bar when Duffy speaks on Boyd's behalf to the drug dealers about the arrival of their next shipment.

In "Good Intentions", Mike is seen inside of the motorcoach when Raylan visits Duffy to warn him that Charles Monroe is out to murder him. Outside, shots are heard and Mike guns down Monroe after he attempted to draw on him (although Monroe survives the shooting).

In "Shot All to Hell", Mike is seen in the diner with Duffy and Ethan Picker when Art Mullen comes in to talk to Picker and take him on a walk. Art refers to Mike as being Duffy's hairdresser, and Mike also attempts to draw his gun when Elias Marcos enters the diner.

In "Kill the Messenger", Mike is seen along with Duffy and Boyd during their meeting with Yoon.

In "Wrong Roads", Mike and Jimmy Tolan are both held hostage by Roscoe and Jay as they interrupt the meeting between Daryl Crowe Jr., Picker, Duffy, and Boyd.

In "The Toll", Mike frisks Boyd as he arrives to Duffy's hotel room and is present at the meeting between Picker, Duffy, Boyd, and Katherine Hale before they are all arrested by the Marshals. Once the meeting is resumed, Boyd kills Picker with the emulex explosive and gut punches Mike, taking his gun. A stunned Katherine can only tell Mike to lock the door when Boyd leaves.

In "Starvation", Daryl visits the hotel room looking for Picker and Duffy, but instead brutally beats up Mike, wanting to know where Boyd's heroin is. Mike confesses that Carl and Jimmy Tolan were in possession of the drugs and knew the whereabouts.

In "Restitution", Mike is briefly seen at the motorcoach when Duffy goes to visit Katherine and Boyd. He then leaves to retrieve a bag that is sitting locked in the front seat of Boyd's truck.

In "Noblesse Oblige", Mike informs Duffy that Boyd wants to have a sit down with both him and Katherine.

In "Sounding", he is seen playing Scrabble with Duffy, where they debate over the word "aplex" being a valid word. Later, he accompanies his boss with interrogating Albert Fekus for information regarding Ava's release from prison.

In "Alive Day", he is seen at the hotel room when Katherine is talking to Duffy.

In "Dark as a Dungeon", he is seen greeting Katherine when she enters to visit Duffy, telling her that he is in a back room changing his shirt because he spilled guacamole on it. Mike awkwardly mentions wanting to accompany Katherine to a double's tennis game one day but leaves to take Duffy's clothing to the dry cleaners.

In "Burned", he is shown expressing his concerns to Duffy about his decision to be a snitch for the Marshals but Duffy assures him that Boyd, Katherine and Markham would have done the same thing to them if it meant they could save their own hide.

In "Trust", Mike is seen present with Duffy when Raylan and Tim talk to him about more CI work. As Mike and Duffy sit and eat lunch in the motorcoach, Mike has pieced together that Duffy snitched on Grady, recalling from the earlier conversation when Mike had doubts about Duffy's decision to be a CI. Duffy asks Mike if he figured it out all by himself before Mike slams his boss's head onto the table and handcuffs him, removing his weapons and cell phone. Mike calls Katherine and leaves a message for her, preparing to out Duffy as the snitch.

In "Fugitive Number One", Mike sits in the motorcoach and listens to classical music as Duffy bargains with Mike to give him more rights in their partnership such as letting him pick out the music, what to watch on TV and offering to drive the motorcoach himself. Mike punches Duffy when he threatens him for not listening, saying that he admired and looked up to Duffy until finding out that he was a rat and now he has to be exterminated. Katherine goes to visit Duffy and Mike in the motorcoach, asking why he snitched on Grady. Duffy says that he killed Simon Poole because Simon was going to rat him out to Grady and wonders why she even cares what happened to Grady since she is in love with Markham. Mike stands back and seems to take in both sides of the argument and intervenes when Katherine attempts to kill Duffy, saying that they don't have to kill Duffy but announce that he is a rat and leave him to fend for himself and that if she kills Duffy, he will have to avenge his death because he is Mike's boss. Frustrated, Katherine shoots him and a struggle ensues between the two, resulting in Mike being shot five times throughout his body, but not before delivering a fatal blow to Katherine that crushes her windpipe. Mike drops the handcuff key to Duffy before collapsing to the floor, groaning in pain and asking for Duffy to hold him as he gurgles his final breaths.