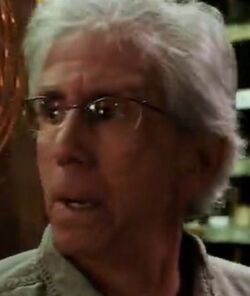 Mike Jackson is a recurring character in the FX series Justified. Mike is the manager of a hardware store in Harlan. He is portrayed by co-star Howard S. Miller.

Mike is the manager of a hardware store in Harlan.

In "Blind Spot", Mike appears in the hardware store when Johnny Crowder comes in wanting to purchase various items to ominously send a message to Ava Crowder (who is also present in the store).

In "Hole in the Wall", Raylan Givens visits his store to purchase items when Roz comes in. Roz flashes Raylan as a part of a distraction to help her accomplice, Benny, steal Raylan's car. Roz also flashes Mike on her way out when he tries to stop her from leaving.

In "Kill the Messenger", Mike tells Raylan that he sold his house to Wendy Crowe, believing that she and Kendal Crowe were homeless, in exchange for a hunting cabin he also owned. Raylan forces Mike to revoke his deal in front of Daryl Crowe Jr..

In "Sounding", he is present at the hardware store when Errol Butler and Ava Crowder come in.