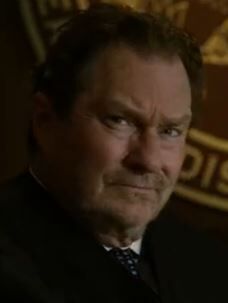 Michael "Mike the hammer" Reardon is a recurring character in the FX series Justified. Reardon is a judge in the Lexington Federal Courthouse where Winona Hawkins formerly worked as a stenographer. Reardon is portrayed by guest star Stephen Root.

Reardon is known to be a very tough judge, even earning the nickname "The Hammer" due to his strict handling of court cases (such as maximum sentences, asset forfeiture and court costs). This originated from Reardon's very first court case in which he presided over a man named Kit McKendrie. Reardon had a gut feeling that McKendrie was no good and gave him a light 18 month sentence and banged it down to time served. After McKendrie's release, he shot a six-year-old as well as a state trooper sent to arrest McKendrie. Since then, Reardon no longer let his personal feelings intervene with his court cases. Reardon also wears a Speedo and carries a .38 caliber Revolver under his gown. It is likely Reardon has no wife or children since in his first appearance he was seen with a dancer named Brandy. Reardon is one of the few people that believe that Raylan was justified in his shooting of Tommy Bucks.

Reardon is first seen in the episode "The Hammer". The EMTs rush into his house to find Reardon laying on a bed in his underwear, and a dancer named Brandy sucking venom out of his inner thigh. A cottonmouth somehow got into Reardon's house, and bit him in his inner thigh, six inches away from "home plate". Reardon, always known to carry around a gun in case someone tries to shoot him in court, had a gun handy to shoot and kill the snake. Raylan is then assigned to protect Reardon by Art Mullen. The two soon leave to head for Reardon's home, when Reardon begins to drive erratically and ends up crash. Raylan goes to his car to find the judge unconscious, and it is revealed that there was a "failure" in the car's exhaust system, which caused carbon monoxide to be pumped into the vehicle. Raylan believes that someone is behind these attacks, and they aren't just accidental, and notices Virgil watching them from across the road. Back at Reardon's house, they share a drink and Raylan asks if Reardon would call Ava's judge in Harlan and suggest that she be allowed to leave Kentucky (since her probation doesn't allow her to). Reardon declines his offer. Later, at a honkytonk go-go bar, Raylan asks Reardon about Kit McKendrie, the first criminal Reardon presided over. Reardon tells him the story saying that he knew McKendrie was a bad guy, but gave McKendrie a light sentence of 18 months and banged it down to time served due to personal feelings, and upon McKendrie's release, he killed a six-year-old and a state trooper sent to arrest him, and since then he has never let his feelings interfere with his rulings. Raylan notices Virgil again watching the two from across the bar, and the two go into the bathroom, but Reardon does not remember Virgil. Later, Reardon and Brandy end up being held hostage by Virgil while Raylan goes to clear the bathroom (Reardon and Brandy had left to perform sexual acts behind a dumpster.) Reardon manages to shoot Virgil in the arm while he is distracted talking to Raylan. Virgil then reveals his plan was to kill Reardon, and have the Marshals kill him so that his ex-wife and son would get the money from his life-insurance policy that he took out on himself. Reardon promptly thanks Raylan for stopping him, saying that he would have killed Virgil had Raylan not intervened.

Reardon is referenced in the episode "Blaze of Glory". His decision to store the court transcripts of the mine explosion case in the evidence box is what sets the plotline of Winona stealing the evidence money into motion. He appears in the episode "Save My Love." Winona attempts to take the bag full of money from the evidence locker up to her room, but Reardon tells her he wants to put "the fear of God" into the council before he handles the Peener case, and makes a reluctant Winona join him in order to report. During the meeting, Raylan comes in and Reardon asks him to check his courtroom for bombs or any other dangerous items. Reardon disallows the video in the controversial court case, stating that the Peeners cannot use a YouTube video that recorded an accidental death. Reardon soons orders Kirby Peener Jr, Sally Peener, and Mrs. Peener out of court due to Peener Jr's constant interruptions. Reardon doesn't charge them, but says he will hold them in contempt of court if they interrupt again. Reardon then becomes the target of Kirby Peener Jr. who is waiting outside of him home to shoot him due to the overruling in the court case.

In "When the Guns Come Out", he and Raylan begin to talk after a confrontation between Raylan and Mabel Johnston, the new court reporter. Raylan tells him that Winona has left, and asks Reardon if he's talked to her. Reardon advises him to give Winona her time to sort things out, and that she will reach out when she is ready. Reardon warns him not to poke around in Winona's personal life, otherwise he might find out something he will wish he hadn't.

In "Watching the Detectives", he is presiding over a court case where someone had sold and captured red-tail hawk. Reardon and David Vasquez are going over the indictment, and he tells Vasquez verbatim what to say. Vasquez tells him to "consider it done", and Reardon says he doesn't consider it done until it's done and tells Vasquez to leave. Vasquez proceeds to call him a "speedo wearing lunatic" under his breath.

In "Guy Walks Into a Bar", Raylan attempts to make Reardon push Dickie Bennett's case back. However, Reardon cannot do so since his hands are pretty much tied. Dickie Bennett tells the court of how he is a changed man and constantly repeats himself about being changed, causing Reardon to become frustrated.

In "A Murder of Crowes", Reardon presides over the Dewey Crowe case against Raylan, and appears to get annoyed at Dewey's stupidity over the amount of money he has won from the case.

In "Starvation", Raylan and David Vasquez talk to him, running by their play to smoke out Daryl Crowe Jr.. Although he warns of the repercussions, he helps them out. This plan involves them having Daryl's nephew, Kendal, tried as an adult for the attempted murder of a federal officer which results in a mandatory sentence of 40 years to life.