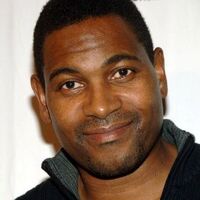 Williamson was born on March 4, 1960 in St. Louis, Missouri. He is the son of Elaine, a certified public accountant, and a father who was an Air Force Non-Commissioned Officer.

Williamson began performing at the age of nine. Along with acting, he also danced as an alternate member of The Lockers troupe on Soul Train along with Fred Berry (star of TV sitcom What's Happening!!). At age nine, Williamson relocated to Los Angeles with his family. While in high school he excelled in athletics, particularly football and basketball. However, acting was his first love and he no longer pursued sports.

Williamson was married to Miami Vice star Olivia Brown from July 2, 1983 - 1985. He later married Cheryl Chisholm in 1989 with whom he had his first child, Phoenix. He has been married to Sondra Spriggs since April 26, 1997; together they have two daughters, Nicole and Maya. In 1998, he was arrested for stabbing his ex-wife Cheryl Chisholm's partner Leroy Edwards. He was acquitted of attempted manslaughter but, in his own words, "I lost my home, which I sold to pay my lawyers, my car and basically lost my career," He appeared with Sondra Spriggs in the 1998 film Species II. The two were married during the filming of TNT's production of Buffalo Soldiers.

Williamson also starred in Nickelodeon's TV series The Righteous Apples. The show focuses on the activities of The Righteous Apples, five Boston-area high school musicians, who in a troubled world, seek to help people in distress. Williamson was the lead singer of the group in the show in which he was just a teenager at that time.

In 2002, he co-starred as Detective Bobby "Fearless" Smith in the critically acclaimed but commercially unsuccessful crime drama Boomtown.

Recently, he has appeared in several episodes of CSI: NY as Chief Sinclair, reuniting him with his Forrest Gump co-star Gary Sinise.

He is a main character in season 8 of 24 (with Clayne Crawford) starring as the special agent in charge of the New York CTU named Brian Hastings.

Retrieved from "https://justified.fandom.com/wiki/Mykelti_Williamson?oldid=21201"
Community content is available under CC-BY-SA unless otherwise noted.