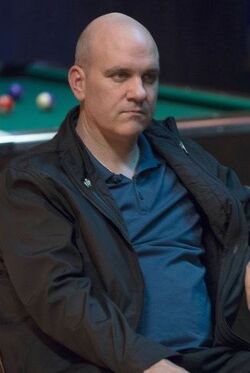 Nick "Nicky" Augustine was a recurring character in the fourth season of the FX series Justified. Nick was an old friend of dirty FBI Agent Jerry Barkley, and he was Underboss in Tonin Crime Family. After he heard that Theo was giving crime family boss place to Theo's son Sammy Tonin instead of him, he tried to make coup and was planning to kill Sammy Tonin, but instead of that happening he got killed in episode "Ghosts", by Ethan Picker and several other henchman under orders from Sammy Tonin. Augustine is portrayed by guest star Mike O'Malley.

Nick and Agent Jerry Barkley have known each other since they were younger and could be considered old friends. Nick chose to work for Tonin Crime Family, while Barkley decided to go into law school. The two reunited when Barkley set up a fake FBI bust, and Barkley decided to protect Nick ever since. Over time Augustine had risen ranks in Tonin Crime Family and eventually ended up to number two guy (Underboss) to Theo Tonin.

In "Kin", Augustine visits Wynn Duffy in his trailer, and talks to Barkley. The two reminisce over old times while they sit down. Augustine and Barkley soon talk about Drew Thompson, and Augustine reveals his knowledge that the FBI lost the case to the Marshals. Augustine tells Barkley that he learned about it from another mole in the FBI before pulling out his gun and shooting Barkley in the head. Augustine tells Duffy that Theo would like for him to find Drew Thompson.

In "Outlaw", Augustine contacts Boyd Crowder, and Boyd offers his services for the Tonin family. In other words, why work through a loser like Duffy? Boyd asks for one more thing. Augustine says that they don't do favors and that anything they give is a debt, which they will expect Boyd to repay. The favor turns out to be Nick and Theo stripping the Clover Hillers of all their contacts with the law, taking away their power.

In "Get Drew", Boyd calls Augustine, requesting $500,000 to cover the $300,000 he needs to buy back Shelby Parlow and Ellen May from Ellstin Limehouse. Augustine rejects the deal, and demands that Boyd find Drew. Augustine flies in by helicopter to the meeting place in Harlan to retrieve Shelby. Augustine flees when he spots the Marshals arriving.

In "Decoy", Augustine arrives at the bar where he has his assistant Yolo punch Boyd several times for his failure to find Drew Thompson. Boyd tells him that in order to find Drew, they need him alive but he needs $500,000 if he wants to help. Boyd then devises his sneak attack plan so that they can all find Drew. When Boyd and Ethan Picker leave for the high school, only Ava Crowder, Johnny Crowder, and Nick remain. Nick tries to flirt with Ava, before outing Johnny's change in allegiance, and his conspiring with Duffy. Ava throws brandy in Augustine's face, pulling out a lighter and threatening to set it alight as she steals his pistol. Ava and Johnny get into a Mexican Standoff as Ava leaves the bar.

In "Peace of Mind", Augustine, Picker and other henchman are at Johnny's bar. Augustine reveals his knowledge that Shelby isn't talking until Ellen May is delivered and he wants Johnny to be the man that finds her. Johnny calls Limehouse and offers him the $300,000, but Limehouse refuses to cooperate and hangs up. Johnny believes that Limehouse has already made a deal with Boyd. Augustine calls Boyd and offers to give him the $300,000 to buy Ellen May back and in exchange, he will hand Johnny over to Boyd. At the bar, Ava decides that it is best she offers the money to Limehouse since he won't respond well to gangsters and he hates Boyd. Nick is against it, but agrees if Boyd stays at the bar as human collateral. Nick, Picker, and Boyd later go to the home of Nicky Cush to look for her and he confesses that she left to go to the church to speak with Cassie St. Cyr.

In "Ghosts", Picker's distrust with his boss Augustine is made clear when the two clash at a diner over Augustine's trust in Boyd Crowder and that he wants to keep Sammy Tonin (the new head of the Detroit mob) waiting. Augustine meets with Raylan Givens in his limo. Raylan offers Augustine a deal: Turn himself in and promise that he will leave his family alone. Augustine accuses Raylan of making cop threats that he can't carry out, and that once he kills Sammy in Detroit, he will return to kill Raylan's family. Raylan, however, is one step ahead of Augustine and has called Sammy down personally to Harlan. Sammy has his men, along with Picker, execute Augustine by shooting up his limo.

Retrieved from "https://justified.fandom.com/wiki/Nick_Augustine?oldid=21696"
Community content is available under CC-BY-SA unless otherwise noted.